Renewed effort to be launched to unite Karachi-centric parties

Renewed effort to be launched to unite Karachi-centric parties 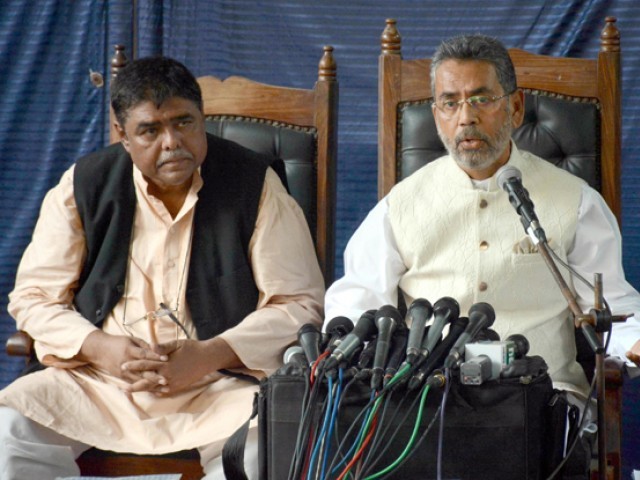 Saleem Shahzad and Saleem Haider announced in a press conference to hold convention of the MQM factions except MQM-London. PHOTO: MOHAMMAD AZEEM

KARACHI: After talks among Karachi-centric political parties failed to materialise into a coalition, a Muhajir activist and a former Muttahida Qaumi Movement (MQM) leader have come out with another formula to gather them on a platform by holding a convention.

Saleem Haider, chairperson of the Muhajir Ittehad Tehrik (MIT), and Saleem Shahzad, an MQM leader whose membership was suspended by the party, held a press conference on Monday at the Karachi Press Club, announcing a convention in a bid to gather MQM factions.

The speakers, however, did not announce the exact date for the ‘Grand Muhajir Ittehad Convention’ and said it will be organised in November after the chehlum of Imam Hussain (AS). According to Haider and Shahzad, the convention will be aimed at ‘thwarting the attempts to divide the Muhajir vote bank’.

Giving details of their strategy, Haider said that through the convention they will move towards an alliance to pursue some basic points – abolishment of the quota system, return of those stranded in Bangladeshi camps, just distribution of electoral seats and adequate allocation of budget and development schemes for Muhajirs.

Meanwhile, Shahzad, who returned to the country in February this year, ending his self-imposed exile of over two decades, said that if the MQM factions and PSP did not evolve a joint strategy, the Muhajir community will be left to suffer.

The former MQM leader faces several cases and was arrested upon his arrival at the Karachi airport. Recently, he obtained bail in all the cases. His sitting with the MIT suggests that he is still interested in politics, despite the fact that the parties mentioned above did not welcome his entry into the arena.

Once considered one of the closest aides to MQM founder Altaf Hussain, Shahzad’s initial reaction to Altaf’s incendiary speech on August 22, 2016 was somewhat vague. Commenting on the speech and its aftermath, he said that Muhajir mandate was divided that day.

Shahzad, however, clarified that he did not support the anti-Pakistan slogan raised by the MQM founder during his speech and in fact condemned it. “I will always stand with Pakistan because this is my country,” he said, lamenting that some quarters eyed his patriotism with suspicion.

One force wants Karachi’s development, the other its destruction: Farooq Sattar

He urged Sattar, Kamal and Ahmed to shun their differences and unite for the sake of the community they belong to and claim to represent. “The politics of confrontation should end now. It’s beneficial for all of us to become one.”

The MIT has clarified that they did not seek yjr involvement of MQM-London in the convention as, according to them, it has taken a stance against the country. “We are with those who are with Pakistan,” Khan explained.

This will be the third attempt to unite Muhajir political parties on one platform. The first attempt was made by Pakistan Qaumi Movement Chairperson Iqbal Kazmi after he entered into talks with MQM-London. As per his claims, he was subsequently picked up by security agencies and the event could not be held. In the second attempt, MQM-Pakistan organised a multi-party conference (MPC) to highlight the issues of Karachi in which other political parties were also invited besides Karachi-centric parties. However, the MPC faced a setback at the eleventh hour, as nearly all major political parties, except the MQM factions, boycotted it and declined to attend.