Secretary to justify quality of drinking water at govt schools

Secretary to justify quality of drinking water at govt schools 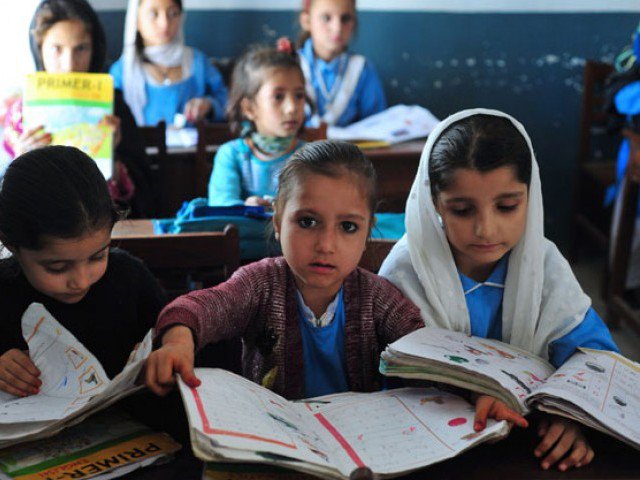 A number of schools in the province do not have adequate basic facilities like electricity and clean drinking water. PHOTO: AFP.

KARACHI: The Supreme Court-appointed judicial commission directed on Saturday the provincial education secretary to personally appear along with a detailed report explaining how the quality of drinking water and hygiene conditions were being maintained at government colleges and schools across the province.

Justice Muhammad Iqbal Kalhoro of the Sindh High Court, who is heading the commission to investigate the authorities’ failure to provide potable water and improve sanitation conditions, gave these directives upon being informed that the quality of drinking water and sanitation conditions at colleges and schools across Sindh was very poor.

He directed the secretary to also explain the hygienic condition of the places where water tanks had been built in educational institutions by October 7.

Earlier, a senior researcher, Dr Ghulam Murtaza, filed a report about his visits to the hospitals run by the federal government. The report showed that 38% of the water being provided to the people at these hospitals contained coliform bacteria beyond the guidelines set by the World Health Organisation (WHO). He suggested that the bacteria could be controlled by changing cartridge filters, use of more efficient UV lamps with filter and regular chlorination of water storage tanks. The commission provided a copy of the report to the deputy attorney-general, Asim Mansoor, with direction to ensure that the suggestions were followed.

Also directing him to communicate the report to the all these hospitals’ administrators for its compliance, the commission ordered them to ensure provision of clean drinking water to the people. It also ordered that water quality testing at hospitals be carried out through a third party every month and reports be submitted to the commission regularly.

The health secretary said he was personally supervising the matter of providing clean drinking water at Sindh government-run hospitals, but admitted that no third party testing of the water quality was being conducted. The commission directed him to ensure that once a month the drinkable water at all public hospitals was tested through a third party and reports were submitted to the commission.

The commission directed the medical superintendents to do the same.

Dr Saeed Ahmed, focal person to the provincial chief secretary, filed a report on implementing the master plan prepared to plug the points from where waste water was being drained into water bodies.

Providing a copy of the same to the task force’s chairperson, Jamal Mustafa Syed, the commission directed him to prepare a timeline for the implementation of short-term measures in the first phase and then long-term measures to curb this ‘menace.’ It also directed him to provide a copy of the same to the petitioner on the next date of hearing so that he could assist the commission.

The commission ordered that ‘it is expected that all the parties concerned, who had to implement the master plan will actively coordinate with the task force’s chairperson in this regard without fail.’

The task force’s chairperson and the Sindh Industrial and Trading Estate’s managing director claimed that the combined effluent treatment plant at Kotri was made fully functional, a laboratory was also set up and industrial waste was tested before letting it into the KB Feeder. The chairperson was directed to visit the plant and submit a report on the flow of the outgoing industrial effluent.

The commission was informed by Hyderabad Electric Supply Company (Hesco) Chief Engineer Saeed Ahmed and additional director-general of legal LK Jakhrani that out of 10 water supply and sewerage schemes, only one had been energised.

However, their claim was disputed by the provincial public health engineering department’s (PHED) additional secretary. The secretary was directed to nominate an officer, who will sit with the Hesco and Sukkur Electric Power Company authorities to sort out differences in respect to number of the connections that had yet to be energised. After such an exercise and if there is no dispute on any of these schemes the connections will be energised without any further delay, the commission ordered and sought a compliance report.

About the effluent treatment plant at Shaheed Benazirabad, the commission was informed that it had not been made functional, although previously the PHED secretary had made a statement that it was functional.

The commission was of the view that in respect to either improvement of quality of water or treating the effluent, the PHED was making misstatements before the commission and so far this department had not achieved any tangible progress. It told the PHED secretary to come fully prepared on the hearing to reply to the commission’s queries.

The additional advocate-general, Sarwar Khan, was directed to coordinate with the secretary in this regard and communicate the commission’s displeasure on his lacklustre approach towards the issues. He was also told to communicate a copy of the court’s order to the provincial chief secretary to look into the matter. Meanwhile, Dr Murtaza was directed to visit the said plant and submit his recommendations about requirements to make the plant functional.

In respect to the Golarchi filter plant in Badin, the local government department’s secretary informed the commission that the plant was not yet functional. Siemen’s representatives claimed the plant had been completed but since the PHED did not take over possession of the plant and a considerable period of time had lapsed, the machinery had become rusty and went out of order, which needed overhauling.

The commission directed Siemen’s representatives and the secretary to resolve the dispute within one month, after which the PHED and LG secretaries will submit their reports showing the functioning of the plant. It was informed that during building of the plant the Badin deputy commissioner used to receive all funds from the federal government.

The commission personally summoned the DC along with relevant documents showing the funds received by him and the expenditures.