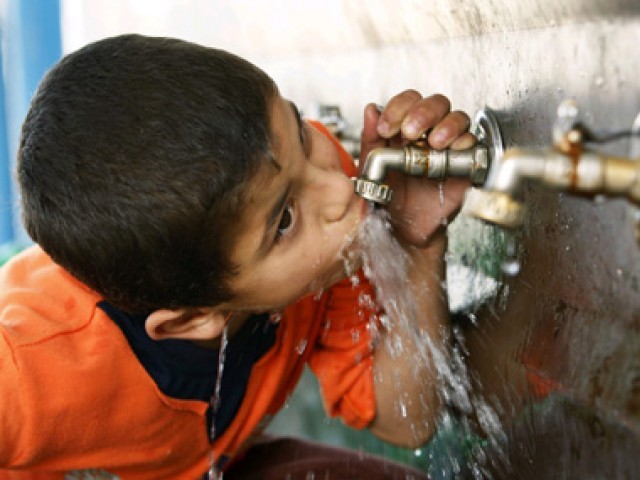 A child drinking water from the tap. PHOTO: REUTERS

KARACHI: The judicial commission rejected on Saturday a report by the chairperson of the task force constituted to ensure provision of clean drinking water in the province.

Headed by Justice Muhammad Iqbal Kalhoro of the Sindh High Court and constituted by the Supreme Court to investigate the authorities’ failure to provide clean drinking water and improve sanitation conditions, the commission declared the report unsatisfactory.

At the outset of the hearing, the petitioner, Shahab Usto, filed his written arguments on whether the judicial commission had the jurisdiction to issue contempt of court notices and start contempt proceedings against government officers for failing to comply with the Supreme Court’s orders.

The advocate-general, Barrister Zamir Ghumro, was provided a copy of the written arguments and sought time to go through the same and submit his arguments. Therefore, the hearing on the issue was adjourned till August 12.

The chairperson of the task force, who is also the provincial irrigation department secretary, and the federal secretary for planning and development informed the commission that during a recent meeting of the Executive Committee of the National Economic Council the whole scheme of the Right Bank Outfall Drain-I, II and III had been approved and remaining work was likely to resume soon.

They said the meeting had also approved funds for some components of the S-III development project and supplying additional water to Karachi through the K-IV project in line with the SC’s order. They assured that they would submit minutes of the meeting soon.

The task force’s chairperson filed a report on the status and quality of drinking water taken from both ground and surface sources.

Justice Kalhoro observed the “perusal of the report does not lead one to reach any satisfactory conclusion about progress being claimed by the (Sindh) government to have improved water quality in Sindh”.

The Karachi Water and Sewerage Board’s (KWSB) deputy managing director admitted that sewage was mixing with drinking water at 117 points where the pipelines had leaked. He said work to repair leaking sewerage and water pipelines was being done on priority basis. He said positive results will be seen by this September. The commission directed him to expedite efforts and show some tangible progress in this regard by the next date of the hearing.

The commission inquired from the DIG West what steps were being taken against illegal water hydrants and water theft through illegal connections, as such complaints were comparatively more in his district.

Justice Kalhoro while referring to water theft observed that the issue could be resolved within 15 days if the authorities concerned were willing to do it. He said the practice of puncturing water pipelines and stealing the essential commodity had turned into a serious problem, which will not be resolved by only registering cases.

The secretary of the local governments department, Ramzan Awan, complained that some ‘miscreants’ were hindering their work.

Expressing its dismay over the state of affairs, the commission questioned who will resolve the people’s issues if a senior officer of the secretary’s level shows such helplessness in running affairs.

The commission directed the task force chairperson to get the law regulating water hydrants sanctioned by the KWSB immediately. The secretary undertook that in the future betterment charges will be provided to the KWSB and Water and Sanitation Agency on a monthly basis.

Regarding the sewerage treatment plants (STP-I and STP-II) in Shaheed Benazirabad district, the provincial public health engineering department’s secretary filed a report, saying these plants were complete but could not start operation for want of electricity connections.

According to the secretary, his department had already placed an order for purchasing two transformers, which were likely to be supplied within two or three days, after which the plants will be made fully operational and a compliance report will be submitted.

He said that most of the water supply and drainage schemes had not been provided electricity connections by the Sukkur and Hyderabad electricity supply companies.

Regarding the treatment plant at Golarchi, the public health engineering department secretary said it was not complete yet and had been handed over to his department for execution. A notice was issued to the Badin deputy commissioner to appear on August 12 to inform latest status of the said plant.

The health secretary filed a report regarding supply of clean drinking water in the hospitals run by the Sindh government along with reports called by him from these hospitals’ medical superintendents.

He said all MSs had been sensitised about the issue of providing drinking water to people at the hospitals and hopefully within next 15 days clean drinking water will be provided.

He undertook to personally supervise the supply of clean drinking water at hospitals and submit periodical reports to the commission.

The Sindh Environmental Protection Agency’s director-general informed the commission that the air monitoring unit installed on the roof of the agency’s head office in Karachi to monitor air pollution was properly functioning. However, the data logger of the unit had gone out of order and had been sent to Lahore for repair, he added.

Another worker dies in Gadani