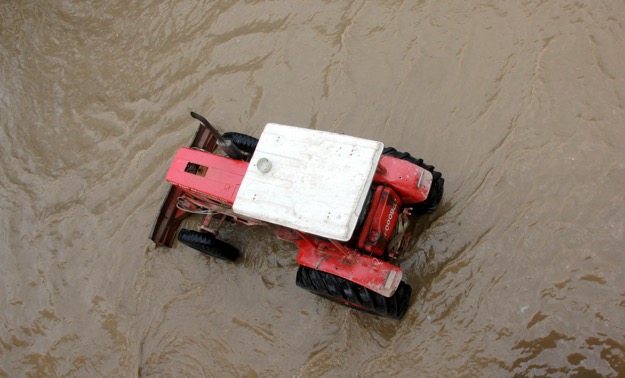 Many vehicles could not travel through the water that had accumulated on streets across the city. PHOTO: EXPRESS

KARACHI: The dilemma of Karachi is that everyone claims ownership of its politics but no one wants the responsibility of its administration, even those who earn billions off the city.

The rain spell or, as the authorities might prefer, unexpected rain spell that started Wednesday and continued on Thursday has washed away Karachi, exposing the false claims of the municipal bodies’ efficiency by the Sindh government.

Horrifying scenes have been witnessed across the city, where cars, motorcycles, animals and bodies have been seen swimming in the water that has flooded the streets and, instead of rectifying the issues and rescuing people and their belongings, the provincial and local governments are exchanging barbs and passing the buck.

Around a dozen people and many sacrificial animals have been killed across the city during rain-related incidents since the start of fresh monsoon spell. The casualties were reported in Gulistan-e-Jauhar, Lyari, New Karachi, Gabol Town and other localities.

After the recent deaths, the weekly death toll in the city due to rains has risen to more than 40. Most of the deaths have occurred due to electrocution, partial building collapses and road accidents.

On the other hand, Sindh Local Government Minister Jam Khan Shoro replied with allegations that the situation worsened because the city had been neglected for four decades by those who held sway over it – the Muttahida Qaumi Movement. “We have done work on the nullahs in the city for drainage of water and now we are trying to make them flow smoothly.” 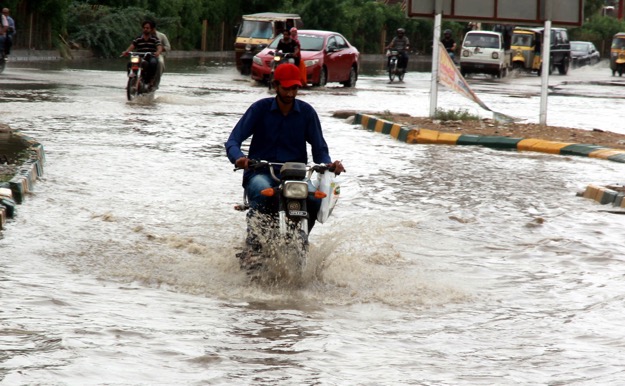 A motorcyclist travels through water on a main thoroughfare of the city. Many areas were submerged after the rain. PHOTO: EXPRESS

With multiple warnings issued beforehand about a monsoon system that was going to hit the city with splashing rains, the apparent lack of seriousness and irresponsible behaviour of the authorities left citizens to suffer.

“Imagine you couldn’t sleep the whole night due to power outage and in the morning you open your window to get some fresh air but what you get is smell of sewage and see your street inundated with blackish water from a nearby nullah,” Kashif Aslam, 42, a resident of Shadman in District Central, told The Express Tribune.

“Is this what people pay the government for in the name of various taxes and vote for them to get in power?” asked Aslam, who criticised political parties for their alleged role in ruining the infrastructure of the city by encroaching upon lands that were meant for civic facilities.

“I couldn’t go to the office today but was grateful to my boss for being reasonable. There are so many who could lose their jobs for not being in the office. These are questions we need answered,” said Asher Shahzad, a 30-year-old resident of Shah Faisal Colony “Who is actually responsible for this mess? And I ask because it is my right; I pay tax.”

Shahid Alvi said he left for his office on Sharae Faisal early in the morning via his office transport but near Hyderi in North Nazimabad the level of water was more than four feet and we had to immediately leave the vehicle while helping their female colleagues reach a dry spot.

An elderly resident of New Karachi, Moazzam Khan, shared that he has seen much heavier rain in the past but it never brought such destruction. Sadly, due to negligence and carelessness of the authorities, the citizens of Karachi have to suffer, he said. “Is there any way for us to simply enjoy the rain?” he asked. “Aren’t we citizens of same country, are we only living to see ourselves suffering at the hand of the government?”

Pictures circulated on social media showing people pushing their vehicles out of submerged roads and trying to rescue themselves. A video showed the body of a young man who apparently died of electrocution lying in the water while people looked on helplessly. Other videos showed sacrificial animals that died due to the same reason. 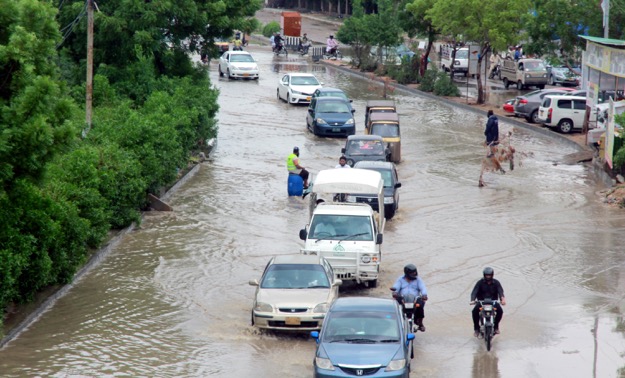 Cars navigate their way through water collected on the streets of Karachi. PHOTO: EXPRESS

Almost everyone that spoke to The Express Tribune was displeased with the authorities’ performance. They said political parties were only concerned about people when there was an election nearing or a tussle amongst them.

Some of the problems shared by irate residents included not being able to reach their offices, not finding public transportation, delayed flights, slow emergency response, no electricity, sewage water on the streets and fear of casualties and in some cases of death due to electrocution. Many were unable to earn their daily wages and went to bed with empty stomachs.

Main thoroughfares in posh localities, such as Defence Housing Authority and Clifton, were flooded. However, a spokesperson for the Cantonment Board Clifton, which is responsible for the municipal matters in both the above mentioned areas, said teams had been dispatched to clear the streets of stagnant water. Floods were still observed near Do Talwar, 26th Street, Bath Island and other areas.

After a balcony collapse was reported in the Pakistan Chowk area in which five sacrificial animals were killed, The Express Tribune tried to contact the Sindh Building Control Authority (SBCA), however, no official responded. According to an estimate, there are around 300 buildings in the city that are prone to mishaps in case of even small downpours or the slightest natural disasters. These buildings are still inhabited, despite the SCBA’s claim of evacuating them after the Liaquatabad incident.

Calling in the troops

As monsoon rains continued to lash the city on Thursday, the Karachi administration requested the Pakistan Army’s assistance to conduct of rescue and relief activities in the city.

“The Karachi administration requested the army to assist them in managing torrential rain effects in the city,” the Inter-Services Public Relations (ISPR) said in a statement on Thursday.

The army, the military’s media wing added, is extending its full assistance and water extraction pumps have been immediately dispatched.“The Chief of Army Staff has directed provision of all out assistance for helping citizens,” it said. 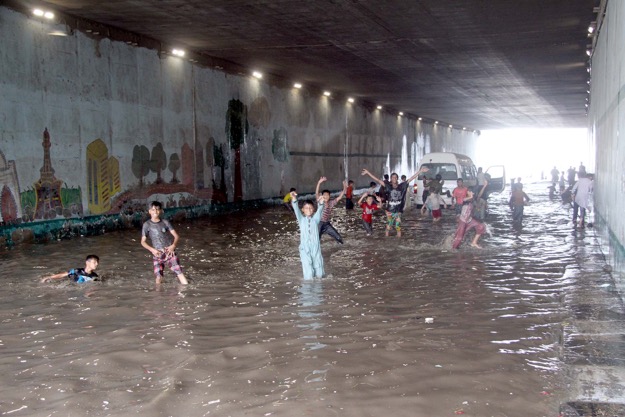 Children play in the water accumulated in the Liaquatabad Underpass. PHOTO: EXPRESS

Teams from the Pakistan Navy are also assisting the city administration in Karachi to control the unusual situation.

According to a naval spokesperson, the navy is providing pumps to drain water from several areas of the metropolis.

According to Dr Abdul Rashid, the Meteorological Department spokesperson, the highest rainfall was recorded in North Karachi at 130 millimetres. Nazimabad saw 124mm, Gulistan-e-Jauhar and its adjoining areas 41mm, Saddar 64mm, Masroor Base 125mm, University Road 51mm and the airport 43mm.

Talking about the monsoon system, he said t has started to lose its intensity, however, the city will witness heavy to moderate showers today (Friday). He added that no previous record was broken and the city has witnessed heavier rains in the past.

PK 366 to Islamabad took off after a delay of two hours.