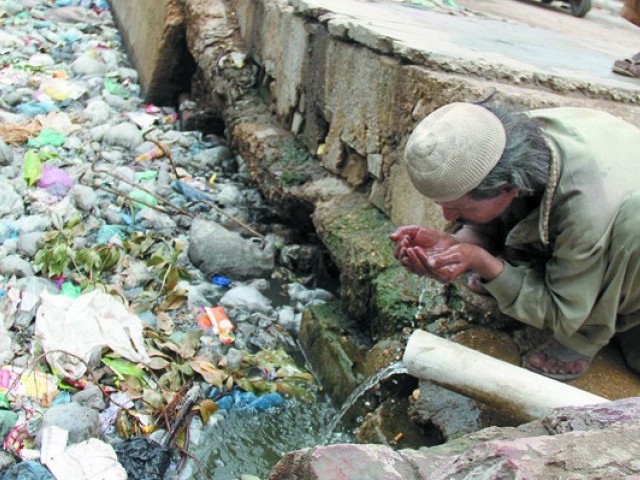 A man drinks water from a pipe installed in a sewage drain near Hyderabad Railway Station. The SC constituted the commission to probe the issue of non-provision of drinking water and sanitation in Sindh. PHOTO: ONLINE

KARACHI    : The judicial commission sought on Saturday the final report regarding theft of water by industries in SITE area, due to which the domestic consumers are suffering.

Headed by Justice Muhammad Iqbal Kalhoro of the Sindh High Court, the commission also issued a notice to the provincial advocate-general to assist the court in passing appropriate order to root out the menace of water theft.

The commission was constituted by the Supreme Court (SC) to probe into the allegations regarding non-provision of clean drinking water, sanitation and its impact on the environment in the province.

On the last hearing, the commission had issued notices to the authorities and chairperson of the task force for their replies to the allegations made in a private complaint regarding theft of the water by the industries in SITE.

During Saturday’s proceedings, the task force’s chairperson, Jamal Mustafa Syed, filed a preliminary report in which he confirmed the theft of water in the SITE area. He requested for time to submit final proposal to curb the said menace.

Calling final report and proposal on the ways to curb this menace, the commission also put the Sindh advocate-general on notice to assist the commission in passing appropriate order to root out the menace from the SITE area, as it had been generally complained that due to pilferage of water by the industries, the people of the area were suffering for want of drinking water.

Earlier, the commission reserved its verdict after hearing arguments from the petitioner and the provincial advocate-general on the point whether or not the commission had jurisdictions to issue contempt of court notices to the government officers, who had, prima facie, failed to comply with the orders passed by the SC.

Appearing on the commission’s notice, Dr Siraj Ahmed Abbasi, the director of the LINAR Cancer Hospital, Larkana, informed the court that the new incinerator to dispose of infectious waste has been purchased and will be installed within 10 to 15 days.

Dr Shahid, the director of NIMRA, Jamshoro, also told the court that presently they were disposing of the nuclear and other waste through the incinerator installed at the Liaquat University Hospital, Jamshoro. However, he assured that within a short span of time they will purchase their own incinerator.

The officers claimed that the water provided to the people in their hospitals was clean and drinkable, which could be verified in order to check the quality of drinking water in the federally administered hospitals in Sindh.

The commission tasked a senior researcher, Dr Ghulam Murtaza, who is a member of the task force, to visit all the federally administered hospitals and after verifying the quality of water there, submit his report to the commission within 15 days.

The focal person to the provincial chief secretary, Dr Saeed Ahmed Qureshy, said he will file a report in the coming week for implementing the master plan to plug the points discharging untreated municipal and other infectious effluent into the watery bodies.

The representatives of the Sukkur and Hyderabad electric power supply companies claimed that they had supplied electricity to all the water and drainage related schemes as per the list provided by the provincial public health engineering department (PHED). But since there was a dispute between the department concerned and local people on 10 schemes, the Hyderbad Electric Supply Company could not energise their connections, a representative said. The Sukkur Electric Power Company’s representative also made the same statement in respect of one connection.

The commission asked the chief engineer to confirm the claim of the two power supply companies. The engineer undertook that within a short time, all the non-functional rural water supply scheme will be made fully functional to provide their fruits to the people. He also sought time to submit report regarding the current status of rural water supply schemes, including the amount incurred in the annual development project on their rehabilitation and work done in this connection.

Justice Kalhoro also directed the PHED’s secretary to submit a report on the current status of the treatment plant-I and II Shaheed Benazirabad and whether or not they had been operationalised in compliance with the commission’s order. He also directed the district judge of Shaheed Benazirabad to visit the treatment plant and submit report on its current status.

The secretary of the provincial industries’ department informed the commission that they had finalised a list categorising the industries into different classes, according to the level and volume of the effluent they were producing. According to him, within due time all such units will be notified by an action to control such effluent.

In terms of the commission’s order dated August 12, Muhammad Waris, the project director Muhammad Yasir and Hussain Ismail, the deputy general-manager of the M/s Siemens, which is a contractor, informed the court that the filter plant at Golarchi was completed and had been handed over to the PHED. They agreed PHED Badin will take over the filter plant on August 28.

Justice Kalhoro directed them to ensure this was done in the presence of some representatives of the local government department, as it was informed that ultimately the said filter plant was to be run by the department.

The chief engineer also sought time to consider enhancing the capacity of four reverse osmosis plants installed in Badin, as it had been reported that due to a small storage tank on these points, they were not working according to their full capacity.

Justice Kalhoro noted that no progress report had so far been filed on tabling of the proposed law for regulating the water hydrants in Karachi or elsewhere.

The assistant advocate-general, Ghulam Mustafa Mahesar, said the proposed law had been submitted to the secretary law for final deliberations, however, yet it had not been placed before the Sindh Assembly.

The commission directed Sindh advocate-general to come prepared on the next date of hearing to reply to the queries of the commission on the issue that despite issuance of specific directions, the said law had not been tabled in the assembly for approval so far.

The health secretary also filed a report regarding supply of clean drinking water and management of the hospital waste in the hospitals of Sindh. However, he informed the court that the purchasing process of new incinerators was going on and within short time it was going to be finalised.

The commission directed the secretary to supervise quality of drinking water being supplied to the people in the hospitals and keep close liaise with the medical superintendents of the public health facilities for this purpose.