KARACHI: Several neighbourhooods of the metropolitan city plunged into darkness on Monday night after more than 300 feeders of K-Electric, the private power supplier of the city, tripped following heavy rains and thunderstorm.

According to initial reports, at least 10 people, among them two young siblings, died in rain-related incidents, mainly of electrocution.

A K-Electric spokesperson said that power cables snapped in several neighbourhoods, but staff had been sent there to restore electricity supply as soon as possible.

Most of the fatalities were caused by electrocution. Rameez, 18, died in Rizvia Society, 18-year-old Basma died in Pak Colony, Haris and Mansoor were electrocuted in Garden East area of Soldier Bazaar, while 18-year-old Maryum died of electric shock in North Karachi.

Elsewhere, two young siblings were killed when the roof of their house collapsed in North Karachi, near Disco Morr. Hajra Bibi, 28, and an unidentified man died in similar incidents in Faqir Goth, on Superhighway, and Gulshan-e-Kaneez Fatima areas, respectively.

“Rainwater has entered my home. There is no light. K-Electric officials are not attending my calls,” said a resident of Federal B Area. 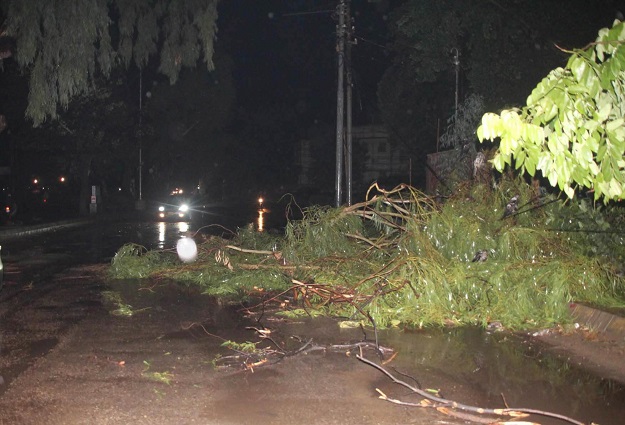 The swamping of roads created traffic logjams as dozens of vehicles broke down in the middle of the roads at different places.

The rain exposed the tall claims of civic authorities as drains overflowed and rainwater mixed with sewage entered houses in low-lying areas and slums turning them in cesspools.

One of the biggest markets of sacrificial animals in the Sohrab Goth nieghbourhood suffered a major blow as many tents were blown away by gusty winds and heavy rains.

“The sanitation system has collapsed in the city as the storm drains have been encroached upon. How can one expect tangible results,” said Dr Zakir Qaimkhani who lives in Gulshan-e-Iqbal.

He added that after the rain the weather turned pleasant, but the heavy downpour piled up misery on citizens as they have been marooned inside their houses.

Faisal | 4 years ago | Reply 70 years and we still can't manage the regular annual monsoon rains! Something has drastically gone wrong somewhere. Problem is population at large does not want to wake up and do something about the corrupt rulers. They have passively accepted this as inevitable as they take their usual "herione" dose from Indian films and waste 3 hours a day on that. 2 more hours a day wasted on Indian TV channels. And the rest of the waking hours wasted on following Indian culture that exploits the poor, the weak , the women. So its the law of the jungle.
Hasan | 4 years ago | Reply Born in Karachi & love Karachi as my home, but Karachi has gone to the dogs! All of Pakistan sucking up to the likes of Khans, Hussains & Zardaris need to come (and live) in Punjab to know how human beings live in a peaceful, secure, clean and beautiful environment. The Sindh Government has eaten and destroyed Karachi from the inside out. It has become an unlivable city riddled with crime, disgusting litter everywhere and no social life for its citizens.
VIEW MORE COMMENTS
Akram | 4 years ago | Reply What use are the Nukes if we cant defend ourselves against something as simple and predictable as rains .
Tyggar | 4 years ago | Reply Toilet getting flushed
Noman | 4 years ago | Reply Haris and mansoor were my friends......
Prada | 4 years ago | Reply How about building reservoirs to store this precious water instead of blaming India for restricting your water?
Replying to X
Saved ! Your comment will be displayed after the approval.
Error !
Error! Invalid Email.