Amir Khan parties with mystery brunette and blames Faryal Makhdoom for it!

Amir Khan parties with mystery brunette and blames Faryal Makhdoom for it!

Khan had an epic meltdo­wn with his missus on Twitte­r last week
By Entertainment Desk
Published: August 8, 2017
Tweet Email 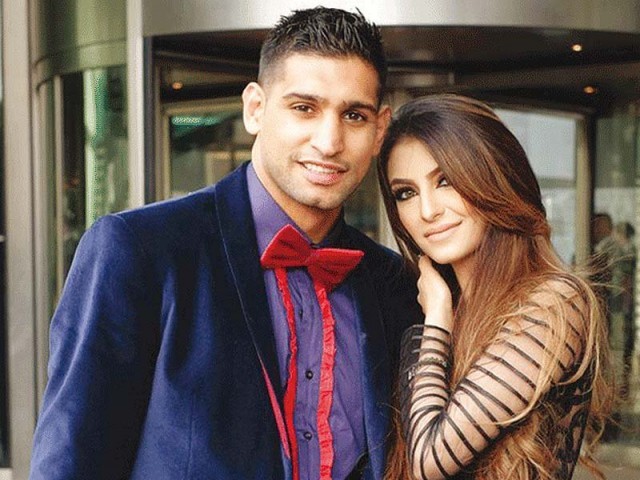 Boxer Amir Khan and his wife of four years recently made headlines as the 30-year-old boxer announced that the couple has split on Twitter.

Soon after the announcement, Khan uploaded pictures and videos of a night out, partying with his friends and an Instagram babe.

Now, Khan claims that it was his ex who “drove him” to partying as he posted an apology to the much offended fans, saying, “I don’t want to live like this,” reports Mirror.

The Bolton boxer took to Snapchat to apologise to fans for his behaviour after he was caught partying with model Gulbahor Becknazar.

Khan had an epic meltdown with his missus on Twitter last week – accusing her of “moving on quickly” with fellow fighter Anthony Joshua.

Khan confirmed the couple had split in a Snapchat video, and said he hoped to move on from the break-up.

But in his latest video, he said he was “stressed”, “frustrated” and accused his wife of “taking his daughter away”.

Speaking in the video, Khan said, “Hi everyone. I just want to apologise for my behaviour yesterday.

“I know it’s something you guys don’t wanna see but it’s what my ex-wife in a way drove me to do basically. Faryal has drove me, her mother have drove me to do this.

Amir is currently training in Dubai and would be jetting back to Britain so he could “sort everything out”.

He said “I think I need to get back, so I’m going to leave tomorrow” in the video filmed as he was topless on a balcony.

The video came after Khan appeared in a clip with his arm around a stunning model in the backseat of a car.

The boxer said, “I don’t want to live like this. I only went out yesterday because I was so stressed with all the drama that’s gone on and I just wanted to let myself go.

“I don’t drink alcohol or anything but I just went out with a group of friends to enjoy my night.

“Look guys, please don’t use it against me, I did nothing wrong yesterday, I was just so frustrated with everything that’s gone on. I just do apologise and I’m sorry for upsetting you all.”

The couple’s public break-up began as Khan posted a slew of Twitter posts blasting his wife and claiming they were getting a divorce.

She responded, claiming he had been “hacked” – but he then responded and confirmed “everything” was true and there was no hack.

Meanwhile, heavyweight Joshua, who was the caught in the middle, said it was nothing to do with him and he had never even met Faryal.