Says God wants us to clear out hearts in the holy month of Ramaza­n
By Entertainment Desk
Published: June 13, 2017
Tweet Email 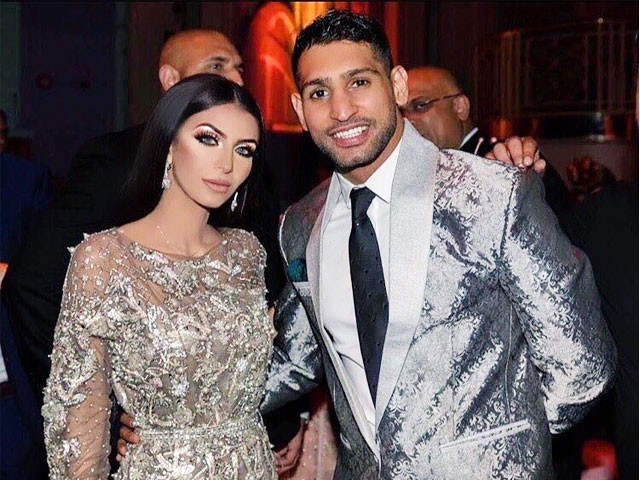 On account of an open feud between Faryal Makhdoom and her in-laws, boxer Amir Khan and his family had been in the limelight for quite some time.

However, according to reports, the boxer and his wife have finally decided to bury the hatchet in a decision initiated by the much-criticised Faryal.

According to the Sun, Amir took to Facebook page to share this news with the fans, “My dad and I at the pak v ind cricket match last weekend. We both had a great time together. Faryal and I decided to put everything behind us. She played a big part in helping me move forward. Life is too short.”

He further added, “It’s the month of Ramadan. This is the month Allah asks us to clean our hearts & love one another. A lot has happened but my wife and I have accepted to move forward with a clean heart. We hope to expect the same from others? Ameen.”

However, the post has since been taken down, but a picture of a blissful looking Amir and his dad-cum-former manager, Shah, at the Indo-Pak match at Edgebaston cricket ground in Birmingham is there.

Me and my dad at the Pak v Ind cricket match. Edgebaston cricket ground in Birmingham pic.twitter.com/M58EI4tWL6

Amir also tweeted, “Past is the past. Looking forward to a brighter tomorrow.”

The truce brings to an end six months of increasingly bitter in-fighting and name calling on both sides. Previously, Faryal took to Snapchat and spoke out against her in-laws and domestic abuse she had been facing after her marriage, Amir’s family denied the allegations, blaming Faryal’s western lifestyle for the fall out between the couple and the family.

Amir’s mother responded in the press accusing Faryal of lying, adding, “I once told her, ‘Faryal, do not wear this type of clothes; wear a scarf.’ But she paid no heed so I stopped saying it to her again, because it was Amir’s duty to tell her that.”

In retaliation, Faryal posted a Snapchat of Amir’s brother in which he is not wearing any clothes and its titled “My dressing is an issue. Double standards.”

Soon after that, the British-Pakistani boxer dropped his father and uncle from his management team, speculations are rife that the main reason behind his decision was his wife, Faryal.

Faryal Makhdoom gives ultimatum to Amir Khan fearing more sex tape leaks
Things turned even sourer when Amir and Faryal were not present at Amir’s brother, Haroon Khan’s wedding in UK. Faryal took to Snapchat yet again, this time to claim that she along with her husband and daughter were not invited.

“Everyone’s been asking why I didn’t attend Amir’s brother’s wedding. I kept quiet. But the truth is AMIR’S wife and child were not invited. Or even included in the celebrations. They could have at least tried.” said Faryal, in the snap.

This photobooth was everything! I loved the set up and everything! I'm sure our guests did too.. @ukselfiephotobooth thank you so much for being part of Haroon and arifas walima ❤️

Amir married Faryal four years ago in New York and the two have been continuously updating fans through Instagram and Facebook ever since.
For now we are just happy to see them back together.

5 years since Mehdi Hassan left us