The startl­ing claims were posted by the star on her Snapch­at accoun­t
By Entertainment Desk
Published: December 7, 2016
Tweet Email 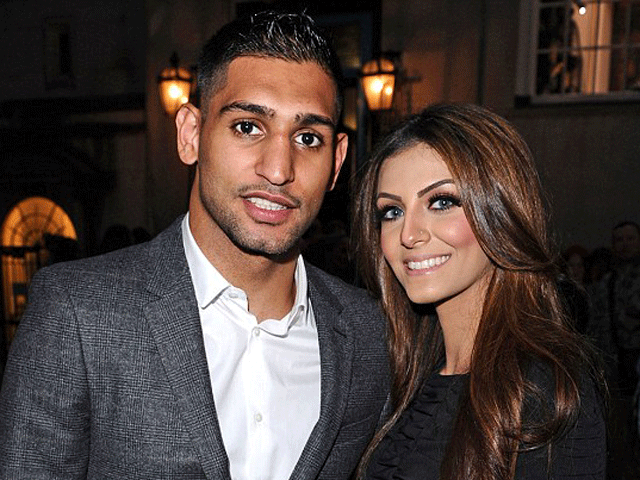 International boxing star Amir Khan and his wife Faryal Makhdoom are one of the most adored couples in the industry.

On Tuesday evening, Faryal took to Snapchat and spoke out against her in-laws and domestic abuse she had been facing after her marriage. Openly speaking out on the matter, we had a tough time believing that there may be trouble in paradise for the couple.

Messages posted on her Snapchat hinted at instances of domestic abuse by her sister-in-law and mother-in-law.

“Don’t get your sons married if you’re going to abuse and bully the wife,” she said in a post.

“What about when your sister-in-laws come to hit you when your husband’s not home and still you don’t raise your hand out of respect for you husband?” she questioned in another post.

“Then they think it’s okay to bully you in public and call you BAD!” she continued.

Faryal, who is a human rights activist as well as an occasional ramp walker, further revealed that she lives on her own earnings even after marriage, but her sister-in-law still gives her a hard time.

“I worked my a** off on a catwalk from 7am till 12am at night. My husband’s a multi-millionaire but still work and do my own as I can never touch his BLOOD money, when I have a right too! And then I get hating evil sister in laws shitting on me?,” she wrote in another post.

In a yet another message, the star hints at her in laws forcing Amir to opt for divorce despite her being 9 months pregnant.

She then posted a screenshot of hateful comments posted on her official Instagram page, one of which appear to be from her sister-in-law.

Many took to Twitter with supportive words for the star.

@FaryalxMakhdoom is an idol. Love her for speaking up the way she has. Women need to learn from her. #FaryalMakhdoom #bullying #womensrights

Wow @FaryalxMakhdoom is on a roll. Love her for speaking up like this, women need to learn from her. #FaryalMakhdoom #bullying #womenrights

I think people don't understand how though it is for a girl to leave her parents house. Then getting treated like that! #FaryalMakhdoom

It's one thing if FARYAL was crying about herself, but she was also speaking about Amir and the treatment he gets. #Valid #FaryalMakhdoom

Everyone's just waiting for Amir Khan to break his silence on the #FaryalMakhdoom family split issue!

#FaryalMakhdoom well done girl! About time these abusive inlaws are ousted to the world! For every daughter who suffers you are a champion

Faryal Makhdoom did the right thing by speaking up and being a role model for others in a similar situation. pic.twitter.com/bKCPdSlsEp

Recently, the power couple were spotted wearing a Nadina Merabi ensemble at the Pakistan Achievement Award ceremony held in London, during which the pair seemed fine according to this post she shared on Instagram.

Amir married Faryal three years ago in New York and the two have been continuously updating fans through Instagram and Facebook ever since.

Raees trailer is being celebrated across India, but Pakistan has something to celebrate too