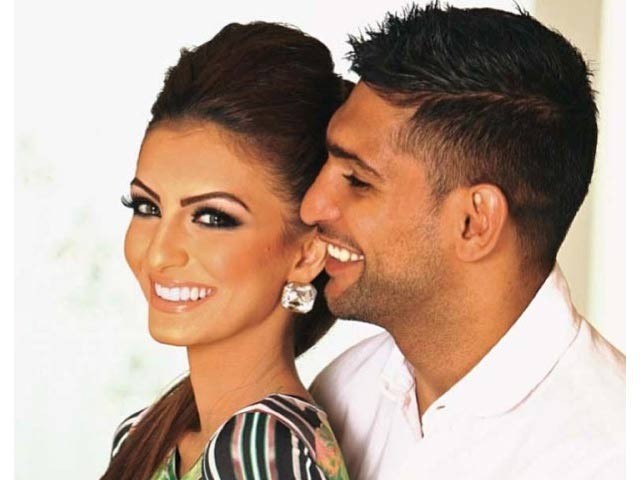 British-Pakistani boxer Amir Khan and wife Faryal Makhdoom have decided to split, the sportsman has announced.

“So me and the wife Faryal have agreed to split. I’m currently in Dubai. Wish her all the best,” he tweeted on Friday.

So me and the wife Faryal have agreed to split. I'm currently in Dubai. Wish her all the best.

While Faryal had a bitter feud with her in-laws last year, the reason for the separation is said to be otherwise.

“Faryal moved on quick. Always mentioned to me how much she wanted to be with another guy, from all people another boxer 🙄 @anthonyfjoshua,” he said in another tweet.

Faryal moved on quick. Always mentioned to me how much she wanted to be with another guy, from all people another boxer @anthonyfjoshua pic.twitter.com/1GBAQnvzMC

“Left my family and friends for this Faryal. I’m not hurt but another fighter. I’m making it public. You getting the divorce #Golddigger”.

Left my family and friends for this Faryal. I'm not hurt but another fighter. I'm making it public. You getting the divorce #Golddigger

Faryal hit back, accusing the husband of lying and coming up with a fabricated story. She snapped back that it was in fact Amir who had been cheating on her and she had been putting up with that.

I'm sure you left your family because they robbed you? Not because of me. Stop making false things up. https://t.co/UsjV52Hvsp

Accusing other boxers just because your boxing career is finished. Man up amir. https://t.co/ERAxgMo0i5

After all these years. I've always defending a cheat, always stuck around for him, always had his back. And I'm called a gold digger?

LOL! He's given me jack shit — I pay house bills and bills for my daughter myself! It's like I'm a single mother while he's out messing

Faryal had spoken out against her in-laws and domestic abuse she had been facing after her marriage. However, Amir’s family denied the allegations, blaming Faryal’s western lifestyle for the fallout between the couple and the family. The feud also led to Amir ‘firing’ his father as his manager.

Interestingly, Faryal had posted pictures of her with Amir, celebrating her birthday at Atlantis, The Palm in Dubai and having a good time at Cavalli Club’s ice lounge just few days ago.

26 years old today✨ celebrating with my babe @amirkingkhan in Dubai

Meanwhile, Anthony Joshua, the boxer Amir accused Faryal of having an affair with, responded, asking the couple to “resolve your situation”.

“I hope you guys can resolve your situation or this is a hack as we have never even met!,” he tweeted.

However, hours after the spat, Faryal on her Snapchat account claimed their Twitter accounts had been compromised.

Moreover, all of her tweets related to ‘calling it quits’ with Amir were removed.

However, Amir in a video post, confirmed the split, saying “nothing had been hacked”.

Amir Khan confirms that all tweets sent by him today were true & that his account has NOT been hacked #AmirAndFaryal pic.twitter.com/vDzNwI7Fmb