A recap of all the major debate­s and news events that affect­ed Pakist­an and The Expres­s Tribun­e’s online reader­s.
By Jahanzaib Haque / Faria Syed
Published: April 12, 2011
Tweet Email 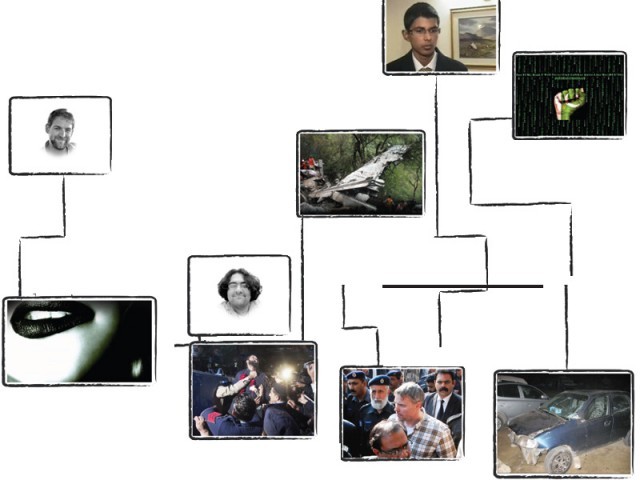 Over the last year, The Express Tribune’s online site has become the epi-centre of a series of ‘great debates’ and viral stories shared among thousands from Pakistan and beyond.

Some of the news reports, blogs and opinion pieces morphed into intense social debates with over 500 comments flying in on a single post. Others spawned side-stories, rebuttals, refutations and counter-posts, while still others were shared for their sheer shock and entertainment value. These stories served to redefine and sometimes even redirect the dialogue about some of Pakistan’s most critical issues.

The zeitgeist of The Express Tribune community is expressed below.

A public farewell note to Pakistan by writer George Fulton is met with a huge outpouring of regret, shock, guilt and scorn. Is he abondoning ship or saving himself and can he get us a visa too? Is his departure a sign of sane voices being driven out of the country?

Two teenage boys are brutally lynched in Sialkot prompting columnist Fasi Zaka to call the entire nation coakroaches, for our lack of integrity and backbone. While many indulge in some healthy self-loathing, others lash back saying that the act of a few cannot represent  the nation. The debate continues as experts ask if barbaric tendencies are ingrained in the Pakistani identity.

Conspiracy theories afoot as 152 people are killed     in an airplane crash in Islamabad. Questions of accountability are rife but there are few answers.

As Punjab Governer Salmaan Taseer is gunned down in an Islamabad market, a stunned  sense of grief unites readers – until the killer comes forward. Mumtaz Qadri’s confession sparks an ideological debate on islamic  values, freedom of speech and vigilante justice. The divide between those who supported Taseer and those who did not widens after his death.

Veena Malik and the moral brigade

The saga of US spy Raymond Davis plays into Pakistan’s multiple conspiracy theories. Davis’ covert, but not unexpected exit from prison after allegedly paying diyat to his victims’ families sparks arguments about where the government’s loyalties lie and what the role of intelligence agencies in Pakistan is.

The police, media and Sharmila Farooqui take a bashing from bloggers and commenters for unethical practices in handling the (as yet) unresolved Karachi rape case.

Facebook banned, Google and Twitter intermittently blocked along with 1,000 other sites in the aftermath of ‘Draw Prophet Muhammad day’.  Pakistan’s great divide features online, with commenters defending the ban up in arms against those calling such restrictions a naïve, inappropriate response.

What about the floods?

Where are the politicians? Where is the media? Why so much apathy? Many questions, few answers in the aftermath of the 2010 floods.

The WikiLeaks saga and the media’s mistake

Even if it’s true, is it ethical? WikiLeaks unveils Pak-US relations as never before, while fake WikiLeaks expose the local media’s shortcomings.

Graphic newspapers are not just about beautiful covers