Intens­ity expect­ed to be simila­r to rains of June end
By Our Correspondent
Published: July 15, 2017
Tweet Email 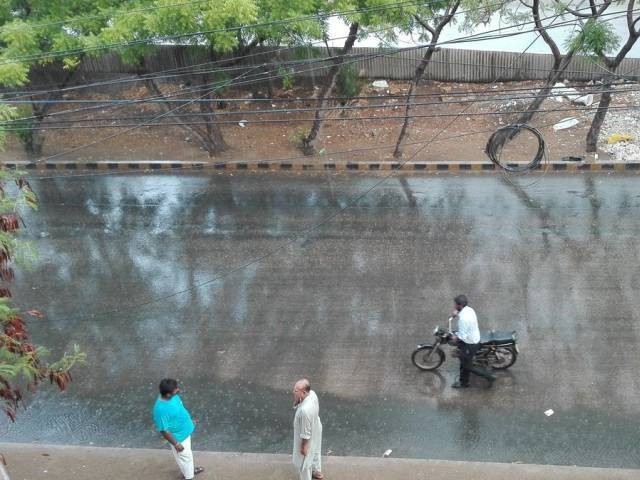 The chance of urban flooding during the rain depends upon the preparation of the municipal bodies, according to the Met office. PHOTO: FILE

KARACHI: Another monsoon spell is expected to grip parts of Sindh from today (Saturday) till Tuesday, which will result in moderate to heavy rainfall in different parts of the province, claimed on Friday Pakistan Meteorological Department Spokesperson Dr Abdul Rashid.

Rashid told The Express Tribune that the monsoon currents will start penetrating Sindh from today (Saturday) and that is likely to produce widespread rain and dust thunderstorms with isolated moderate to heavy rainfalls in lower Sindh – Mirpurkhas, Hyderabad and Karachi divisions – from today till Tuesday.

Commenting on the intensity of the rain, he said that it will be similar to the earlier monsoon system that caused rainfall in the end of June.

He added that the monsoon spell is approaching from Indian Gujrat and till now, Gujrat has seen heavy rainfall, which is why it is expected that lower Sindh and eastern Balochistan will also receive heavy rain in the coming days.

The chance of urban flooding during the rain depends upon the preparation of the municipal bodies, he said, adding if necessary arrangements are not made, then even moderate rains can cause great trouble.

He said that rain and dust thunderstorms with isolated heavy rainfall are also expected at a number of places in Balochistan such as Zhob, Sibbi, Naseerabad, Kalat and Makran divisions from Sunday to Tuesday.

Localised heavy downpours may generate urban flooding and flash flooding in the vulnerable areas of Balochistan, he said.