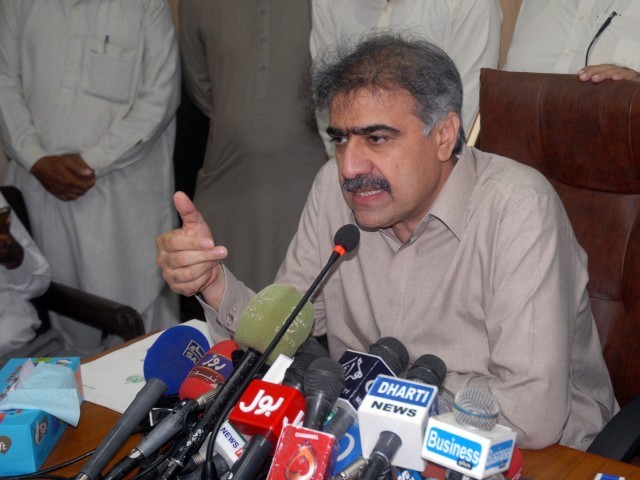 Siyal spoke to the media after meeting at his office. PHOTO: EXPRESS

KARACHI: Home Minister Sohail Anwar Siyal has directed officials of his department to compile data on illegally built and unregistered seminaries. Chairing a law and order meeting on Monday at his office, Siyal said, “We need this information as soon as possible so that we can ensure implementation of the code of conduct pertaining to construction of mosques and seminaries”.

Home Secretary Qazi Shahid Parvez, Sindh IG Allah Dino Khawaja, Counter-Terrorism Department AIG Sanaullah Abbasi and officials of the jail and auqaf departments attended the meeting.  The meeting mainly reviewed the implementation of apex committee decisions.  After the meeting, the home minister told the media that they are devising a policy to deal with theft and mobile phone snatching.

“We have started consultation with various stakeholders, including mobile service providers and market associations,” he said adding that the government can also suggest a stricter punishment for street crime, including mobile theft. “Today, we have discussed at length how street crime cases can be referred to anti-terrorism courts,” he said.

Over 830 incidents of crime reported in May

Quoting the causes of street crime, Siyal said that severe traffic congestion is one of the factors of street crime and the government is devising a strategy to manage it.

According to officials, the meeting’s participants also discussed transporting terrorists from jails to anti-terrorism courts. The issue of closed-circuit television cameras also came under discussion and the home minister vowed that the government would give priority to a project to install CCTV cameras at temples and shrines without any delay.

During the meeting, the participants also discussed the ongoing operation in katcha area and Siyal asked IG Khawaja to start a crackdown against smuggled items being sold openly in the market.