Eight of the 10 labour­ers killed on Saturd­ay belong­ed to Lakho family­
By Z Ali
Published: May 15, 2017
Tweet Email 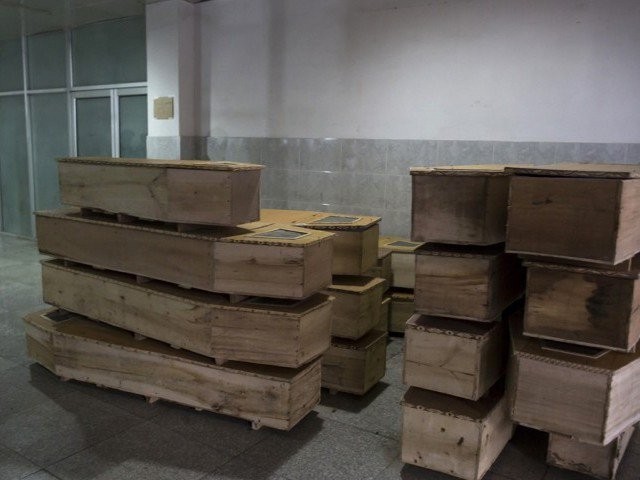 KARACHI: Village Haji Muhammad Siddiq Lakho in Naushero Feroz district wore a sombre look on Sunday as bodies of nine of the labourers killed in Gwadar were carried for their burial to a local graveyard. The grief-stricken families and the glum villagers, sorrowful for the deceased and anxious about the fate of dozens others from their village who are also labouring in Balochistan, laid the dead to rest.

Reflecting the provincial government’s insensitivity to the tragedy, the bodies were carried on tractor trolleys to the graveyard instead of ambulances.

“This tragedy has actually killed dozens of people, not just nine,” wailed Zameer Lakho, a relative of the deceased, while talking to The Express Tribune. “If this was not enough, redundancy and poverty looms large on the village.” He estimated that around 150 people from that village, which was established more than 200 years ago, were working in Balochistan.

“But only over two dozen are presently staying there. The rest have either returned or will be returning soon,” he claimed.

According to Raees Haji Bhale Rakhio Lakho, a local elder, unlike other villages where agriculture allows the poor to eke out a living, large part of their land is barren thanks to salinity. “Young unemployed men are taken to the cities by contractors like Khuda Bux Brohi [who took the slain labours to Gwadar] for menial jobs like road construction.”

Law Minister Ziaul Hassan Lanjar, MPA Sarfaraz Shah and former deputy speaker of National Assembly, Syed Zafar Ali Shah, visited the village to condole with the families. “The federal government is silent on such a big tragedy,” complained Lanjar, who announced Rs50,000 compensation for each deceased. He said the provincial government will announce further compensation.

Meanwhile, Qaumi Awami Tehreek President Ayaz Latif Palijo said it was paid killers and not any revolutionaries who killed the innocent Sindhi labourers in Balochistan. “The global powers are promoting extremism and terrorism for their interests and to fail the China-Pakistan Economic Corridor project,” contended Palijo.

He advised the people of Sindh to record a peaceful protest and to avoid subscribing to any propaganda that can affect the centuries old brotherhood between the Baloch and Sindhis. “Don’t let the conspiracies of destabilisation of our region succeed,” he said.

Sindh Taraqi Pasand party’s chairperson, Dr Qadir Magsi, said the recurrent incidents of killing Sindhis in Balochistan seem to be a conspiracy. He warned that nationalists will not tolerate such attacks.