These labour­ers had been workin­g in Gwadar for two years and were taken there by a small local contra­ctor
By Hafeez Tunio
Published: May 14, 2017
Tweet Email 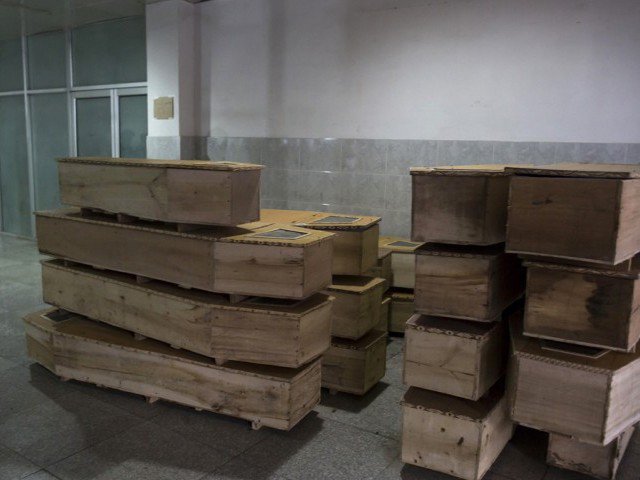 KARACHI  : The massacre of ten labourers in Gwadar saddened the entire country. However, for the Mohammad Siddique Lakho village of Sindh’s Naushero Feroze district – where eight of the bodies were transported through a special C-130 flight – it was a day of mourning.

“Of the ten victims, nine belonged to Naushero Feroze and eight of them were close relatives living in the same village,” Shafique Soomro of Tehsil Meharbpur said, adding that the bodies would be laid to rest on Sunday [today].

According to people in the area, these labourers had been working in Gwadar for two years and were taken there by a small local contractor.

Three real brothers – Abdul Hakeem Lakho, Rasool Bukhsh Lakho and Huzoor Bukhsh – were among those who came under attack. “Two of the siblings died on the spot but Huzoor Bukhsh survived, though sustaining bullet injuries,” Soomro added.

The insurgents in restive Balochistan have been targeting settlers but in the last few years labourers of Sindh have also been killed in attacks often claimed by the Balochistan Liberation Army [BLA].

In April 2015, around 20 construction workers belonging to Sindh and Balochistan were shot dead in Turbat city of Kech district; two daily wage labourers from Tharparkar were killed in 2016 while four Sindhi labourers were gunned down in Balochistan’s Kharan district on April 5, 2017.

The killing of Sindh workers has invited the ire of Sindhi nationalists and trade union workers who have expressed shock and anger.

“The targeted killing of workers is an act of terrorism, to counter which the government must take strict action,” the National Trade Union Federation leader Rafique Baloch.