BLA claims respon­sibili­ty for the killin­gs in Pishuk­an and Ganz
By Mohammad Zafar
Published: May 13, 2017
Tweet Email 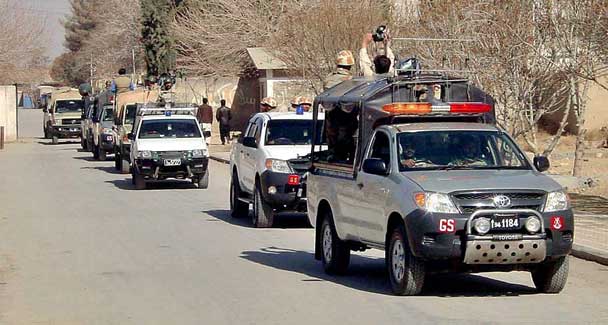 QUETTA: Gunmen killed at least 10 labourers execution-style in the restive Balochistan province on Saturday, a day after a suicide bombing targeting a top senator left 26 people dead and many more injured.

The labourers were working on a road project linked with the China-Pakistan Economic Corridor (CPEC). Witnesses said the labourers were targeted by gunmen riding motorcycles at two separate sites in Pishukan and Ganz areas, some 20 kilometres away from Gwadar.

According to official sources, two assailants first lined up the labourers on gun point at a road construction site between Pishukan and Ganz and then opened fire on them.

Witness Qadir Bakhsh corroborated the account. “The gunmen lined up the poor labourers before firing a volley of gunshots at them,” said Bakhsh, who was close to the site when the gruesome execution took place.

“Eight labourers died on the spot,” he said, adding that the gunmen drove away from the scene unidentified and unchallenged.

The same gunmen later opened fire on another three labourers who were working at an under-construction building near Pishukan, a small coastal town, 50 kilometres away from Gwadar. “One labourer died on the spot while two others, including myself, sustained injuries,” said labourer Hazoor Bakhsh, who survived the assault with a bullet wound.

Soon after the incidents, security forces shifted the casualties to hospitals in Pishukan and Gwadar. Later one of the injured succumbed to his injuries in the Pishukan.

Gwadar’s Additional Deputy Commissioner Jamil Ahmed said the labourers were working on a 25-kilometre-long stretch of road being constructed by the Balochistan Building and Road Department from Pishukan to Ganz areas.

“The tragic incident took place when the labourers were busy in work,” Muhammad Zareef, a senior levies official said.

Hospital sources said all the victims received multiple bullet wounds. “They targeted the upper body parts of the labourers at close range. This caused their instant death,” a source said.

Nine out of the 10 victims were later identified as Muhammad Khan, Ali Dost, Shahband, Abdul Hakeem, Rasool Bakhsh, Abdul Waheed, Zaheer Ahmed, Muhammad Saddam and Muhammad Asif. The name of one deceased could not be verified.

Gwadar’s Deputy Commissioner Naeem Bazai said the labourers who were killed in the firing incidents belonged to one village and came there on a one-month contract. “The victims included two siblings, who came here to earn a living,” he added.

The bodies were later flown to their native village through a C-130 aircraft. Earlier, Commander Southern Command Lt Gen Aamer Riaz and other officials attended their funerals.

Prime Minister Nawaz Sharif, who is on an official visit to China, denounced the tragic incident and directed the authorities to bring the perpetrators of ‘the heinous crime’ to task. “We will ensure all necessary measures to fully realise our dream of a developed and prosperous Balochistan,” Sharif said.

Chief Minister Sanaullah Zehri, who is China along with the prime minister, also condemned the killings and said the elements involved in this barbaric act would not be pardoned. He sought a report on the incident from the concerned authorities.

Home Minister Sarfaraz Bugti termed the incident an attack on Pakistanis and said; “We will not surrender to terrorists and will bring to the justice all those involved in this brutality.”

[WITH ADDITIONAL INPUT FROM AGENCIES]

Shutters down in Quetta over Mastung attack