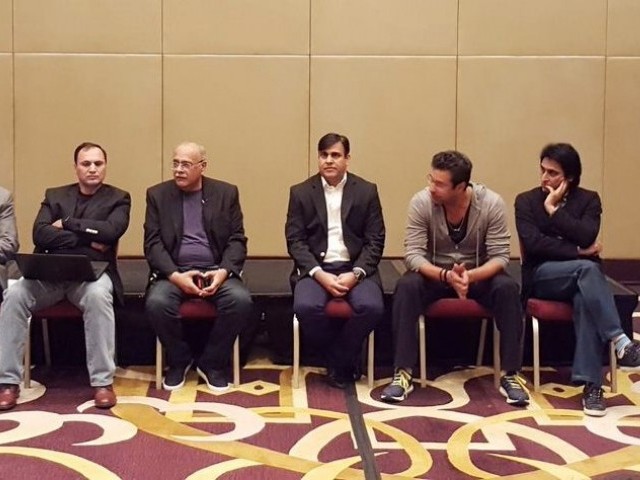 KARACHI: Pakistan Super League (PSL) management on Tuesday organised a ‘meet and greet’ to welcome foreign players and coaches for the second edition of the tournament that gets underway in Dubai on February 9.

Chairman PSL Najam Sethi welcomed players and thanked them for their participation in the league and also briefed them about the security plans that are being put in place to ensure a memorable final at the Gaddafi Stadium in Lahore on March 5.

“Giles Clarke and his team visited Lahore last month and were hugely impressed by the security arrangements. The government has also made a huge investment in securing the city and has assured us to provide fool-proof security to the players who will travel to Lahore for the PSL final,” he said.

Sethi further said that the Pakistan Cricket Board (PCB) has also invited internationally reputed security consultants to visit Dubai and allay the doubts and fears of the players. “We will provide detailed briefings in the days ahead and the players who travel for the final will be making a monumental contribution for passionate followers of the game in Pakistan,” he said.

Brand ambassador of HBL PSL 2017, former Pakistan captain and renowned commentator Ramiz Raja, who is also a resident of Lahore, briefed the players about the prevailing situation in the city.

“Once you taste the flavour of cricket in Pakistan, you will come to realize how welcoming the crowds are. I am hoping that cricket can be brought back to Pakistan, which will be a huge contribution to the emotions of the cricket fans in the country,” said Ramiz.

Bowling legend and brand ambassador of HBL PSL 2017 Wasim Akram spoke about the importance of the return of international cricket to Pakistan.

“While growing up I saw legends like Michael Holding, Sunil Gavaskar and many more play in the stadiums in front of me which was hugely inspiring. It is vital that cricket returns to the country; Pakistanis are passionate about the game,” he said.

Harbhajan Singh comes out in support of Peshawar Zalmi

Akram also said that his wife, who is from Australian descent, is staying in Karachi for the last four years and she is having a great time.

“Trust me, everyone who travels to Lahore for the final will be treated like heroes in the country and their contribution will be remembered by Pakistanis for a long time. The passionate followers of the game will be hugely welcoming and thankful,” he added.

Owner of the Karachi Kings franchise Salman Iqbal and all-rounder Shoaib Malik also assured foreign players that Lahore is a safe venue and all franchise owners and management will do everything possible to ensure the safety of the players travelling for the final.