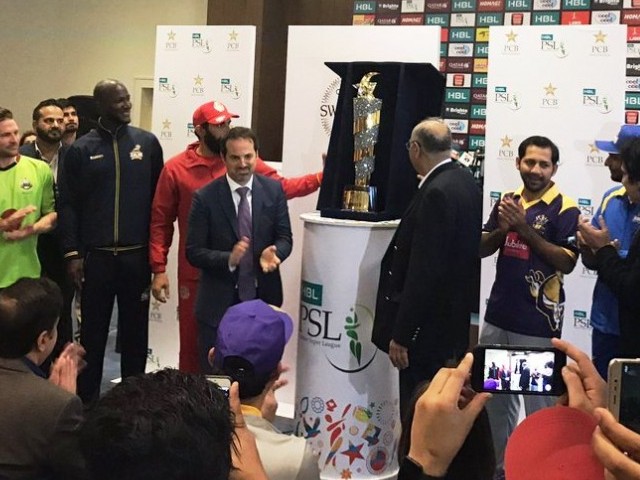 PSL chairman Najam Sethi, alongside captains of the five participating franchises, was present on the occasion where ‘The Spirit Trophy’ was presented to the media.

#TheSpiritTrophy in all of its shining grandeur! The Trophy is encrusted with 50,000 crystals! Imagine that?! pic.twitter.com/pO5CaJO2VD

And the Imtiaz Ahmed Award for the Best Wicketkeeper for #HBLPSL is REVEALED! pic.twitter.com/iOeqRA9zKy

The Man of the Tournament Award for #HBLPSL revealed by none other than @realshoaibmalik! pic.twitter.com/yErkU9QVEz

Brand ambassador of the PSL Ramiz Raja was also present during the ceremony.

“Everything related to PSL is five-star; the trophy, the teams, the managers, the coaches. I feel privileged to be a part of such a dynamic process,” he said. “It took a lot of hard work to put everything in place in the first edition. Plenty of people had their doubts if it will take-off, thankfully it did with flying colors.”

The Captains with the Chairman PSL at #TheSpiritTrophy reveal! pic.twitter.com/cgN89zqsC2

The best thing about this year’s PSL is that the final is going to take place in Lahore which is great news for all the fans. This will be a great opportunity for them to see their superstars. PSL has created a brilliant environment for cricket. It will be priceless experience for young players.