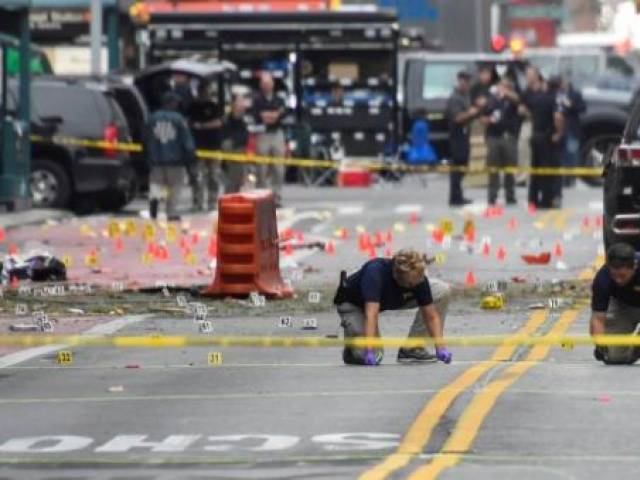 Federal Bureau of Investigation (FBI) officials mark the ground near the site of an explosion in the Chelsea neighborhood of Manhattan, New York, U.S. September 18, 2016. PHOTO: REUTERS

Authorities have been looking to nab 28-year-old Ahmad Khan Rahami, a New Jersey resident and naturalised US citizen, in connection with Saturday’s New York explosion.

The NYPD has released a photo of the suspect, wanted for questioning. Rahami is of Afghan origin, according to the FBI. His last known address was in New Jersey, officials said.

Law enforcement officials said they were investigating whether Rahami could have been influenced by international militant groups or the ongoing conflict in his homeland.

New York Police Department Spokesperson, J Peter Donald announced the development on Twitter. It came after authorities took “a number of people” into custody in connection with the bombing and their New Jersey counterparts worked to render safe “multiple improvised explosive devices” discovered at a train station in Elizabeth just across from Staten Island.

The explosion on a commercial and residential street in New York City’s Chelsea district on Saturday night sent a deafening roar and a powerful shock wave through several blocks, wounding people with shrapnel and flying glass. All 29 victims were released from the hospital, officials said on Sunday.