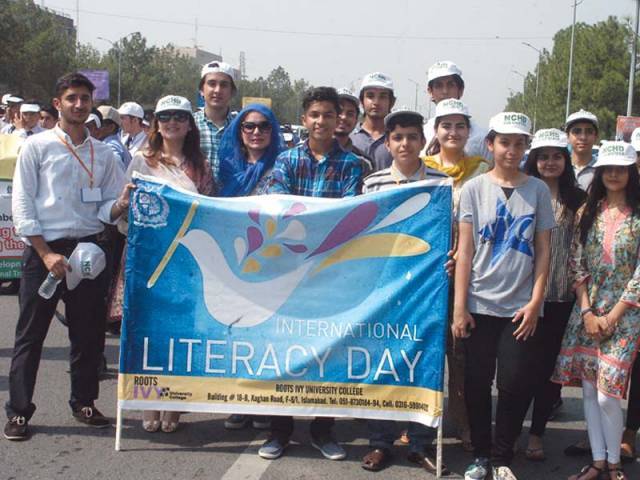 A large number of students and officials participated in the literacy walk. PHOTO: WASEEM NAZIR/EXPRESS

“Our dream is to see Pakistan 100 per cent literate, developed and progressing among the nations of the world,” Razina Alam Khan, the National Commission for Human Development (NCHD)  chairperson said, while speaking at a walk organised to mark the International Literacy Day at the Jinnah Avenue here on Monday.

The walk was organised by the NCHD and the Federal Directorate of Education wherein a large number of students and officials participated.

The day is celebrated to acknowledge five decades of national and international engagement, efforts and progress made to increase literacy rates around the world.

It also addresses current challenges and looks to innovative solutions to further boost literacy in the future.

Pakistan faces an education emergency as a staggering 47 per cent (24.02 million) of all children between the ages of 5 and 16 are out of school, according to government’s own statistics compiled by the Academy of Educational Planning and Management (AEPAM).

“For this noble cause to educate 57 million illiterates including 24 million out of school children, we are striving day and night with a mission to make Pakistan a literate society,” the NCHD chairperson said at the walk.

The former senator said that eradication of illiteracy in the shape of stopping school drop-outs and adult education was the priority of the PML-N government.

This gigantic challenge can be met through “Each One, Teach One” Scheme, she said.

An ideal conflict-free society is possible through education, skill development and knowledge of value addition to the products, Khan said.

The chairperson informed that the NCHD had launched the initiative with an aim to materialise collaborative efforts of the partners in strengthening non-formal education systems at the national level.

The commission, she said, had made 3.4 million people literate through its 164,190 adult literacy centres and non-formal schools which included 90 per cent women.

“Our aim is to empower the down trodden segment of the society through education, skill development and awareness,” Khan maintained.

A Unesco official appreciated the efforts by the NCHD to enhance literacy Pakistan and offered his organisations continued support for adult education, non-formal schools and skill development.