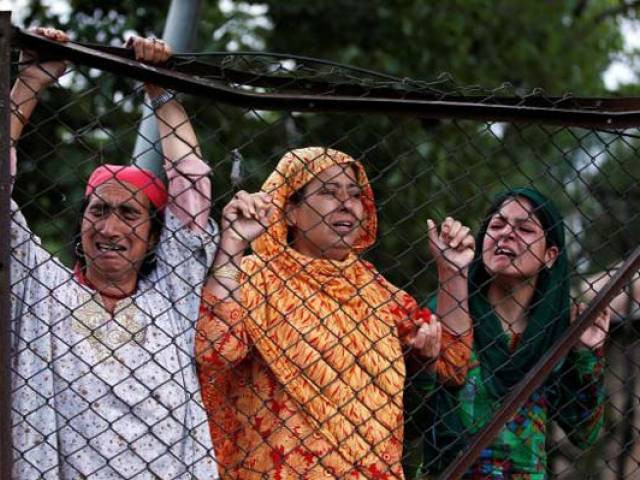 Kashmiri women mourn the death of Burhan Wani, during his funeral in Tral, south of Srinagar PHOTO: REUTERS

The United States (US) on Saturday expressed concern over the ongoing unrest in Indian-occupied Kashmir and urged “all sides” to strive for a pacific settlement of the issue.

At least 47 people were killed and over 5,000 left injured as protests broke out across Kashmir on July 9, a day after Hizbul Mujahideen (HM) leader Burhan Wani was killed in a gun battle with Indian forces.

Kashmiris claim that Indian armed forces are to be blamed for atrocities during street protests, including use of pellet guns.

“We encourage all sides to make efforts to find a peaceful solution to this,” State Department Spokesperson John Kirby told reporters.

“We have obviously seen reports of the clashes between protesters and Indian forces in Kashmir. And we’re, of course, concerned by the violence, as you might expect we would be,” he said.

The spokesperson further added that the US was in close contact with the Indian government over the issue at hand. “But we’re obviously concerned by the violence and we want to see the tensions deescalate,” Kirby said.

“Pakistan has been playing an irresponsible role, it should not claim to be the protector of Muslims,” Singh had told the Rajya Sabha.

“Whatever is happening is completely Pakistan-sponsored. The name is Pakistan, but all its actions are napaak,” the Indian home minister had said.

Rejecting the disputed status of Kashmir, he had asserted that Kashmiris were India’s “own people” and went on to rule out a “plebiscite” in the disputed territory, mandated under United Nations Security Council resolutions. Singh had said the plebiscite was “outdated” and that the people of the region were being led astray.