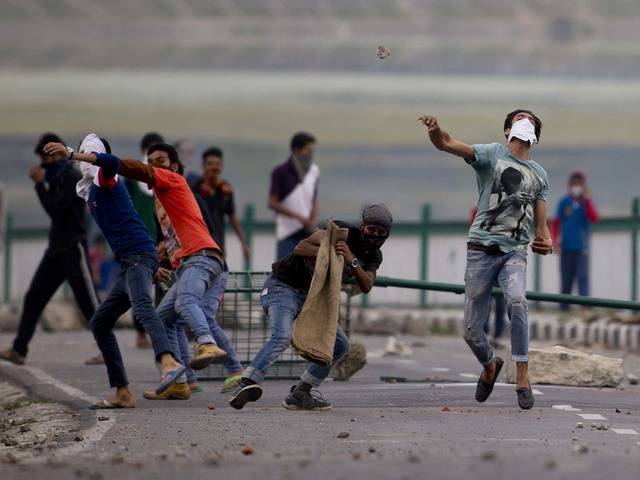 SRINAGAR: Two soldiers and two suspected rebels were killed overnight in a gunbattle in Indian-administered Kashmir near the disputed territory’s de facto border with Pakistan, the Indian army said Saturday.

QUIZ: How well do you know Kashmir?

Colonel N. N. Joshi said the firefight occurred in Naugam sector, some 120 kilometres (75 miles) northwest of the main city of Srinagar, after soldiers intercepted the militants attempting to infiltrate the territory from across the border.

More than 50 people have been killed and thousands injured in weeks of unrest in Indian-administered Kashmir, sparked by the death on July 8 of popular rebel commander Burhan Wani in a firefight with government forces.

Nearly 100 protesters and police were injured in clashes Friday as authorities sought to block a rally called by separatist groups opposed to Indian rule, officials said.

A curfew continued to be in force across large parts of the territory for the 22nd consecutive day Saturday.

Schools and businesses remained shut and internet services suspended, although mobile networks have been partially restored.

Kashmir has been divided between rivals India and Pakistan since the two won independence from Britain in 1947. Both claim the territory in its entirety.

Several rebel groups, including Wani’s Hizbul Mujahideen, have been fighting for decades an estimated 500,000 Indian soldiers deployed in the restive territory, demanding independence for the region or its merger with Pakistan.

Tens of thousands, most civilians, have died in the fighting since 1989 when the armed rebellion against Indian rule of the Himalayan territory began.

India regularly accuses Pakistan of arming and sending rebels across the de facto border known as Line of Control, to launch attacks on its forces.

Islamabad denies the allegation, saying it only provides diplomatic and moral support to the Kashmiri struggle for right to self-determination.

In pictures: A jaguar and crocodile battle it out in Brazil