Why must only the law relati­ng to women’s rights have the stamp of CII approv­al?
By Muhammad Anwar
Published: March 17, 2016
Tweet Email 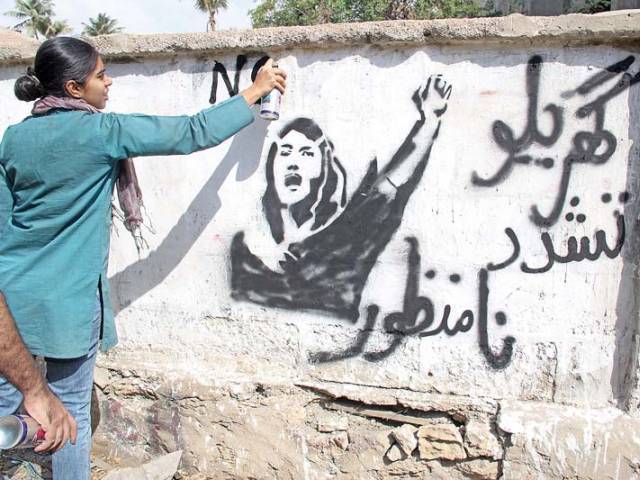 In the ‘new’ Pakistan, as aspired to by the Pakistan Tehreek-e-Insaf (PTI), women will be treated as per the injunctions of Islamic Sharia. The Council of Islamic Ideology (CII) interprets these injunctions. That is why the proposed women’s protection bill in Khyber-Pakhtunkhwa (K-P) was sent to the CII for vetting. But, what exactly is ‘new’ here?

The CII has already declared the Punjab Protection of Women against Violence Bill 2015, un-Islamic. So, in all probability, the K-P’s bill for the protection of women will also be declared the same. Thus, the bill may die before its birth. But there are many questions, which Imran Khan and the PTI-led coalition government in K-P, need to be asked.

The K-P government has enacted, or amended, about 80 laws since the PTI coalition government was formed in 2013. Why must only the law relating to women’s rights have the stamp of CII approval? Why weren’t laws related to local government, banking, taxation, universities, trusts and so on, not considered worthy of CII approval? After all, Islam covers every aspect of human life. Why is the PTI practising double standards?

The PTI, as a party, believes in utilising technical and scientific methods in solving various issues. The biometric voting process has been its main demand, to ensure fair elections. However, the party’s great fervour for science does not coincide with the CII’s determination that DNA cannot be used as primary evidence in rape cases. Perhaps the PTI should also get CII approval on using biometrics for the voting process. For all we know, the CII may have a different opinion on biometric voting procedures and that opinion should be ‘respected’ as well.

Some parts of K-P domestic violence bill against spirit of Islam: CII chairman

I may have opposed the PTI’s dharna for different ideological reasons, but the one thing I really liked about it was the participation, in large numbers, of the youth. The scene was mesmerising, as girls and boys danced together to the variety of tunes played by DJ Butt. There was an undeniable energy to change Pakistan. I wonder if Imran Khan would have dared to obtain Maulana Sherani and the CII’s thumbs-up for the music and dance that took place at the dharna.

The fact of the matter is that in PTI’s ‘Naya Pakistan’, the prospects of women’s rights are bleak. Going by the CII footprints, the PTI in Naya Pakistan will not mind any man marrying off his teenage daughter. Yet, a book written by a girl of the same age will be banned in educational institutions, as we have witnessed in the case of Malala Yousufzai. Imran Khan’s legislative performance on protecting women’s rights is no different from any firebrand religious party in Pakistan. He opposed the Women’s Protection Bill in 2006, when he was the lone MNA of the PTI. During that era, he also voted against amendments to the Hudood Ordinance. It appears that he now feels the need to oppose such legislation in K-P as well. Hence, the bill has been sent to the CII for approval.

K-P, like the rest of Pakistan, has serious gender-related issues and it needs serious consideration from the lawmakers. According to the Aurat Foundation Report, 10,139 cases of violence against women were reported in 2014, in Pakistan, of which 736 cases were from K-P. The number of unreported cases may be much higher. Many victimised women voted for the PTI with the hope that in the new Pakistan, they will be able to live a life of dignity, with all their basic rights protected. How can a party, having justice in its very name, claim to be the party of change if it cannot ensure the protection of and dispensation of justice for women, the marginalised segment of our society?

Is Trump capitalising on neoliberalism’s failure?