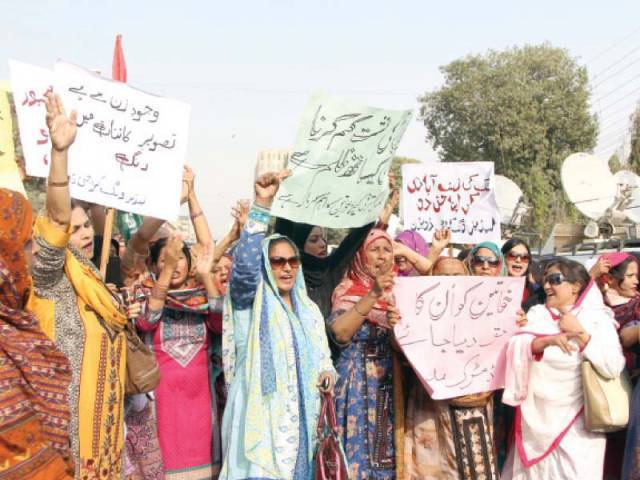 The Provincial Assembly unanimously passed the Punjab Protection of Women Against Violence Bill on Wednesday after Opposition members withdrew all nine amendments on the condition that the government ensure enforcement of the law.

All 10 amendments proposed by the law minister were passed unanimously by the House. As many as 44 women members were present at the session out of overall 76 women lawmakers.

The amendments proposed by the Opposition were withdrawn by women MPAs from the Opposition benches in the absence of their male colleagues. Lawmakers from the Treasury benches thumped their desks to show their appreciation for the move. Treasury member Waheed Gul’s reservations over the placement of GPS bracelets under the bill were shot down.

“Attempts to portray a picture of Pakistan not based on reality must be countered through legislative efforts,” he said. He said the bill could be amended if the need arose.

The bill, which has 31 clauses, provides a system for complaint registration as well as penalties for offenders.

Under the law, a family court would fix hearing within seven days from receipt of the complaint. The defendant will have to show cause in court in the same week. All complaints would be decided within 90 days from the day of the receipt.

The law provides that victims of domestic violence cannot be evicted from their homes without their consent. If they are evicted, the court can intervene.

A protection order may also be granted to the aggrieved, directing the defendant to not communicate with her and to maintain distance determined by the court and surrender all licensed weapons.

The court can also order a GPS tracker to be installed to monitor movements of the defendant, provided than an act of grave violence has been committed or is deemed likely to be committed.

In order to protect “life, dignity and reputation of the aggrieved, a woman protection officer may direct the defendant to move out of the house for 48 hours,” the law says.

District Women Protection Committees will be formed under the law. It also calls for establishment of protection centres and shelters. Amendments to the law now ensure protection of all women. It also redefines violence as any offence committed against a woman, including domestic, sexual, psychological, economic abuse and cybercrime.

Penalties include six months imprisonment or R500, 000 fine for obstructing the district woman protection officer from performing her duties. Violation of interim, protection, monetary or residence orders or illegally interfering with the GPS tracker could result in imprisonment up to one year or impositions of a Rs200,000 fine. Repeat offenders may attract double the imprisonment and the fine.

Filing of false complaints may lead to imprisonment upto three months or Rs100,000 fine. A universal toll-free helpline will be set up to contact the protection centres and shelter homes. Two other laws, including the amendments to the Punjab Forest Bill 2015 and the Punjab Procurement Regulatory Authority Bill 2015, were also passed by the assembly.

The Punjab Forest (Amendment) Bill was passed after an amendment proposed by the law minister was included.

Amendments to the Rules of Procedure of the Punjab Assembly were also implemented following their approval last week. Absence of the concerned parliamentary secretary prevented discussion on some adjournment motions and MPAs were not allowed to take up more than one issue.

Out Of The Way: Orange Line Gives The Blues To Property Owners

The Zakat Rozgar Scheme was discussed on a point of order moved by Treasury member Amjad Ali Javed.

Minister for Industries Chaudhry Muhammad Shafiq said the project was an employment scheme under which rickshaws were being given to the needy as decided by district Zakat committees. The scheme, which was inaugurated in Lahore on Wednesday would be extended to all districts.

The session was adjourned till Thursday.