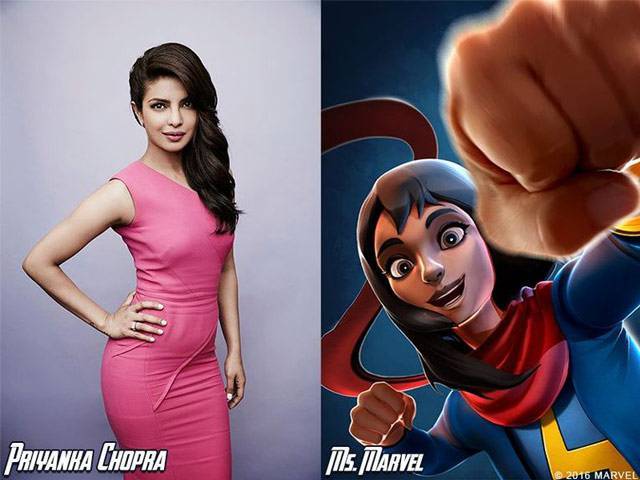 Priyanka just can’t stay out of the news. The Bollywood actor, who has already made waves in Hollywood, is now ready to conquer the comic world by lending her voice to Marvel’s Pakistani-Muslim superhero Kamala Khan (Ms Marvel).

The actor took to Twitter to break the news to her fans and wrote, “Say hello to Ms. Marvel-I’m her voice and she’s my alter ego in MARVEL Avengers Academy!”

As expected, fans were more than excited to hear the news.

Priyanka chopra is the voice of Ms.Marvel ❤️

do you hear me crying from pride. #peeceeee

@jpooch21 I was sold on Priyanka as Ms. Marvel.

Priyanka Chopra would be the perfect choice for Ms. Marvel

Kamala Khan is a Pakistani-American Muslim born in Jersey City after her parents moved from Karachi, Pakistan. Her powers and abilities include shape-shifting, accelerated healing factor, and bioluminescence — emit a glowing yellow light. The Bajirao Mastani actor is soaring high on the success of her American TV series Quantico and has her Hollywood movie debut Baywatch in the pipeline.

She has also won the People’s Choice Award for ‘Favourite Actress in a New TV Series’ category, making her the first South Asian actress to bag the award.

Bollywood’s raunchy side comes to the fore