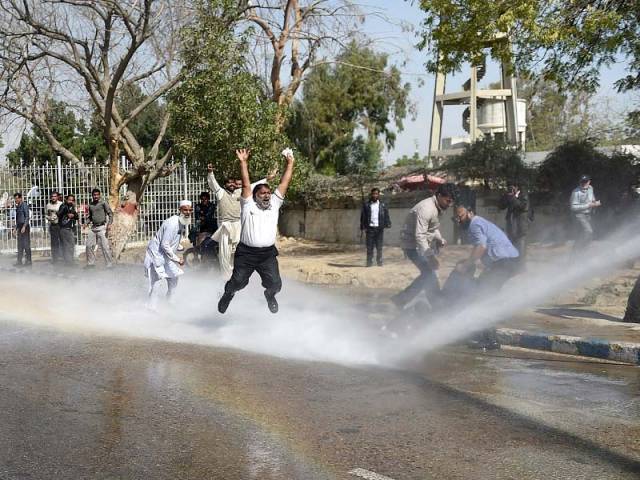 PIA employees shout slogans as police use a water cannon on them during a protest near the Karachi airport. PHOTO: AFP

A standoff between the government and the national airline’s employees turned deadly on Tuesday after three protesters were killed by ‘mysterious’ gunshots during a violent protest at Karachi airport, bringing air traffic across the country to near standstill.

A chain of events saw PIA Chairman Nasser Jaffer resigning from his post, taking full responsibility for the brute use of force against the protesters in Karachi. Sensing the predicament of air travellers, the Civil Aviation Authority has requested a private airline company, Air Blue, to commence special flights from Lahore, Karachi and Islamabad.

In the morning, the Pakistan International Airlines (PIA) labour unions defied a government ban on union activity and observed their planned strike against the privatisation of the national flag carrier.

Heavy contingents of riot police and paramilitary Rangers were deployed outside the Jinnah International Airport.  The protesters were charged. They were shouting vociferous slogans against the government. And they clashed with the law enforcers who confronted them near the old airport, a stone’s throw from the Jinnah terminal.

When the situation slipped out of control, the law enforcers used water cannon, tear gas and batons to disperse the protesters. Dozens of protesters were wounded. While the scuffle was on, mysterious gunshots rang out. “They killed a man. They killed him,” cries went up as the crackles of gunshots briefly subdued the noise of the protesters.

PIA’s senior pilot Sohail Baloch, who has been leading the protests, was able to escape detention. Later he met journalists at a discreet location. “Paramilitary troops wearing masks fired straight at the protesters,” he alleged. “We did give a call to suspend flight operations but we did not ground any flights forcibly.”

As the news spread, the Pakistan Airlines Pilots Association (Palpa) told its members not to proceed to any airport in the country. More than 35 domestic and international flights had been cancelled by the evening.

Pilots, cabin crew and flight dispatchers, who had earlier reported to work, started walking away. Officials fear the Engineering Department, which besides aircraft overhauls is responsible for checking planes before every flight, can technically bring the airline to its knees.

Unlike previous showdowns, the government tried to act smart this time and invoked the Essential Services (Maintenance) Act to outlaw union activity.

The strategy worked as hardly any flight was cancelled until 11am when around 1,000 PIA employees started the march playing on a truck-mounted megaphone a provocative song, “Tere Baap Ki Nahi Hai PIA”.

Hours after the deadly melee, the two law enforcement agencies denied their personnel fired the gunshots. “No Rangers personnel fired [gunshots] to control the protest at [the] airport,” a Rangers spokesperson said in a press statement issued shortly after the incident.

DIG East Kamran Fazal said the police was investigating the nature of the weapon used, insisting the law enforcers “did not carry small arms” to the protest. He admitted the incident could easily have been avoided.

“We were just asked to stop them through negotiations. The police did not fire and we do not know who opened fire,” he told the media at the protest site.

All PIA workers in Lahore stopped working as soon as the news of the deaths broke around 3pm, cancelling at least eight PIA flights.

Most of the passengers affected were on their way to Saudi Arabia for Umrah. Extra contingents of police, Rangers and the Airport Security Force were deployed at the airport.

At the Benazir Bhutto International Airport in Islamabad, the protest led to the cancellation of 15 domestic and international flights.

A CAA official said the PIA staff closed ticket counters, cargo services and flight operations after they received the news of the deaths in Karachi. They later gathered in the parking area of the airport and offered prayers for their deceased colleagues.

In Peshawar, the PIA employees were split on whether to join the strike or not. Despite the boycott, five flights took off from the Bacha Khan International Airport until 1:45pm. The operations were suspended in the evening owing to the possibility of a faceoff between the two groups.

In Dera Ghazi Khan, the PIA staff protested in front of the airport and closed down all booking offices. Angry protesters in Multan staged a demonstration at the city terminal and removed banners and portraits of Prime Minister Nawaz Sharif from the airport.

Enraged by the shootings, union leaders of different state-owned companies also supported the PIA staff. Labour union members of PTCL, WAPDA and OGDCL held a protest at the National Press Club in Islamabad, where they threatened the government to stop harassing PIA workers or they would also take to the streets.

Those killed at the Karachi airport protest were identified as aircraft engineer Saleem Akbar, and IT Assistant Manager Syed Inayat Hussain Rizvi. Engineer Muhammad Zubair was also injured and in a critical condition.

Inayat, 55, died before reaching the Aga Khan University Hospital. His body was shifted to the Jinnah Postgraduate Medical Centre (JPMC) for an autopsy. Saleem, also 55, succumbed to his injuries at the JPMC, where 11 injured victims were brought, said emergency head Dr Seemin Jamali.

The medico-legal officer confirmed both the deceased were shot from the front and died of bullet wounds.