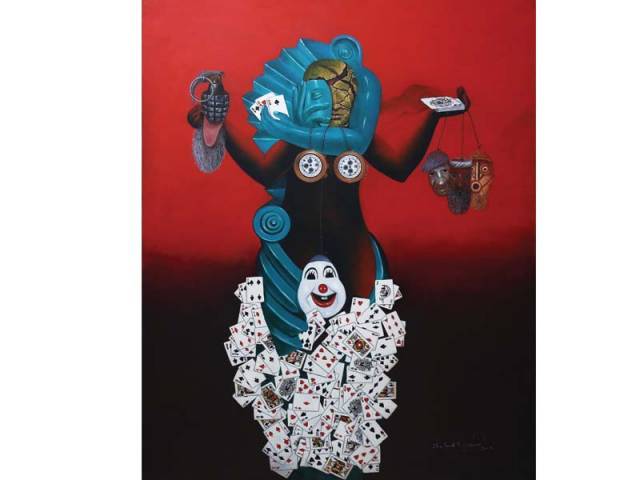 The artists says his work is a combination of slavery, shadows and innocence. PHOTO: COURTESY KOEL GALLERY

[The world is a children’s playground before me

Night and day, this theatre is enacted before me]

The famous verse by Mirza Ghalib inspired artist Shahid Rassam to express the various forms of societal oppression on canvas.

Rassam was in conversation with renowned scriptwriter, television host and satirist Anwar Maqsood at Koel Gallery on Saturday.

The tale of domination and violence (Tamasha) is as old as humankind, what is new is that most of humanity has become a tamashai [spectator], reads the abstract written by Rassam.

Spectacles of untold miseries unfold behind every wall and in every street, but all the world cares about is Wall Street, it adds.

“My work is a combination of slavery, shadows and innocence,” he said. He also explained how all over the world the extremists are thriving on oppressing the weak.

Thinking in images: Mahmood paints a life’s experiences on canvas

One of his paintings, titled ‘Slave’, depicts a dominating figure that is on the top but his face is diseased. The ants and flies on his face show that the figure is stale and decomposed, said Rassam.

All over the world, from Peshawar to Paris and from London to Ludhiana, the dominance of extremists is dictating over the silent spectators, who seem to have gone numb in the face of terror, he claimed. The artist condemns the terrorist attacks by depicting their impact on innocent lives. His painting, titled ‘Shadow of Paris’, depicts a green figure lying on a train track and is surrounded by bodies of dead birds. “Terror is everywhere around us in the name of faith, sect, ideology, market, class, race, cast and creed has stunned the world,” he added.

“His [Rassam] work is phenomenal and looks like pictures clicked by a camera,” said Maqsood.

Rassam is inspired by Salvador Dali, and it is a good thing as every big artist and author is inspired by someone and it also depicts in their work, claimed Maqsood. However, Rassam has left Dali behind and wants to do more in his own domain.

Initially, Rassam used to paint faces and buildings, but now they have vanished, said Maqsood while talking about the artist’s earlier works. The faces have been replaced by poignant images and themes, he added.

“Now his thoughts have started spreading on big canvas and he presents his complicated moods with beautiful colours,” explained Maqsood

Currently, Rassam is collaborating with Indian poet Gulzar for an exhibition paying homage to Ghalib. The event will be held in February in India.

His current exhibition is also part of his ‘Ghalib and Gulzar’ series. The exhibition will continue till January 30.