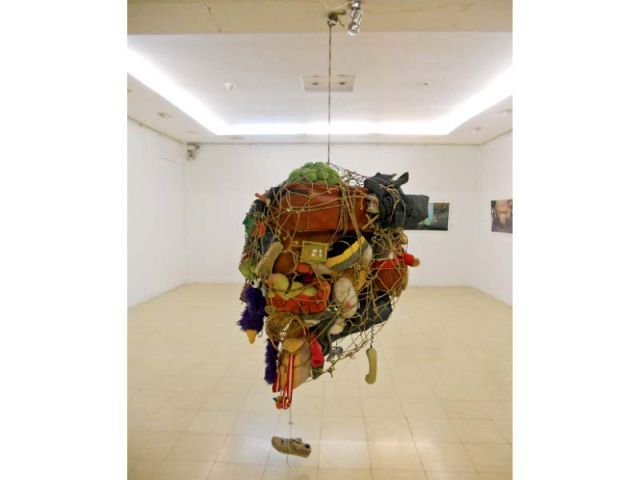 The common thread that joins the three female artists is the open mannerism with which they presented their ideas. PHOTOS COURTESY: VM GALLERY

KARACHI: The themes that have been explored by three artists in a recent show titled ‘Thick Thin Skin’ exhibition at VM Art Gallery, are different. Yet the common thread that joins them together is the exposed and open mannerism with which ideas have been presented, not failing to baffle an onlooker.

The three artists have come together to exhibit their fears, expressions and beauty in a very crude and objectifying manner. Ramla Fatima has tried to deconstruct not only the human body but its identity and all that makes a body an identity.

Dealing the subject with a hammock-like installation full of clothes, shoes and items of general possession, Fatima has tried to show her fear of explosion not only internally but also on the surface as well. “I explore and represent what most people keep hidden or try to keep private,” said Fatima. The objects, which are her means to display her fear for future, maintain a certain level of mystery.

On a similar level of technique, Samreen Sultan’s display on canvas is a social commentary on body. From issues of maintaining plastic beauty and having to fit in the mould set by the society, Sultan has dealt with both the extreme situations to establish her backlash against conformity and repression. For this reason, one gets to see the mind and the position of the artist in terms of fantasy, yearning to unshackle the tradition.

Taking the thought of objectification further, are the canvases and installation of Batool Manduvi. Interestingly, Manduvi came with a unique concept of painting with sounds. The installation that on the face of it appears as a simple white sink with a message ‘Don’t throw up,’ makes one believe that perhaps it’s figurative for motivation, but it really is not.

Icons of Art: A variety of masterpieces under one roof

Manduvi has brought, to what she terms as energy of sounds. According to her, a mundane task such as washing face involves a person looking up in the mirror as a reflex action. Manduvi had replaced the mirror with headphones, so that one could journey back and forth along with the sounds. “You start creating stories out of your imagination. My work is about objects and its relationship with the viewer and one starts to think about the secrets that the object might reveal,” she said.

Contempt of court: SHC defers indictment of top cops by a week