Pakistan among countries most affected by climate change

Pakistan among countries most affected by climate change 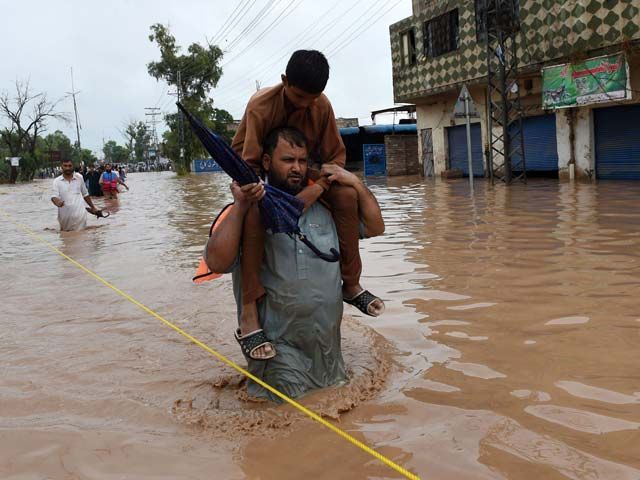 People walk through a flooded area of Peshawar on July 26, 2015. PHOTO: AFP

LE BOURGET, FRANCE: With recurring devastating floods and droughts almost every year, Pakistan has made it to the list of countries that have been most affected by the extreme weather events between 1995 and 2015, according to a report published on Thursday.

The Global Climate Risk Index, released by the Bonn-based advocacy group Germanwatch, ranks Pakistan eighth, two spots higher than last year’s 10th spot, on the list of countries most affected by the extreme weather in the last 20 years (1995 to 2014).

During these years, on an average, around 487 people were killed annually in weather-related incidents.

Meanwhile, Pakistan features even higher on the Climate Risk Index for 2014. It ranks fifth on the list of nations most affected by the direct consequences of extreme weather events in 2014. Flood victims wade through a flooded area along a road as they wait for help, in Multan, September 13, 2014. PHOTO: REUTERS

After low rainfalls in March 2014, which threatened food security of poor households in the country, heavy monsoon rains and floods in September caused 367 deaths, affected more than 2.5 million people and over 1 million acres of cropland.

The 2014 floods largely affected community infrastructure in Punjab and Azad Jammu and Kashmir, where more than 5,000 community development schemes were damaged, costing over Rs15 billion to the national exchequer.

Every year, countries such as Pakistan and India are threatened by extreme weather events and remain in the bottom ten of the index, the report adds.

Meanwhile, Honduras, Myanmar and Haiti top a new list of nations hardest hit by two decades of storms, floods, landslides and droughts that killed more than half a million people.

The report is a red-flag to negotiators from 195 countries trying to broker a global climate-saving pact in Paris.

Honduras, Myanmar and Haiti were the most afflicted by such disasters between 1995 and 2014, said the latest edition of the annual index.

Next were the Philippines, Nicaragua, Bangladesh, Vietnam, Pakistan, Thailand and Guatemala.

Altogether, more than 525,000 people died as a direct result of about 15,000 extreme weather events, the report said.

It shows only one piece of the puzzle and is not a comprehensive index of vulnerability to climate change, researchers stressed.

For example, the study does not take into account sea-level rise, glacier melting or more acidic and warmer seas.

“The Climate Risk Index thus indicates a level of exposure and vulnerability to extreme events that countries should understand as a warning to be prepared for more frequent and/or more severe events in the future,” the report said.

Germanwatch urged negotiators at the November 30-December 11 UN climate conference in Le Bourget on the northern outskirts of Paris to reach a universal deal to avert a climate catastrophe.

“Paris needs to deliver a far-reaching and durable climate regime that safeguards affected populations,” it warned.

They were followed by the Philippines, Pakistan, Bulgaria, Nepal, Burundi, Bolivia and India.

Most of the countries who made it in the top 10 for extreme weather in 2014 had suffered “exceptional catastrophes,” Germanwatch said.

But “over the last few years another category of countries has been gaining relevance: Countries that are recurrently affected by catastrophes such as the Philippines and Pakistan,” it said.

Tolls from disasters are also affected by development strategies, such as population growth in vulnerable areas and protection against extreme events, experts also caution.