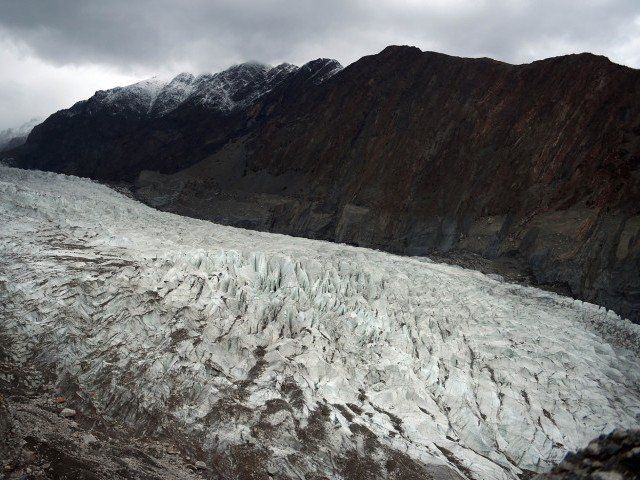 THATTA: Fisherman Muhammad Yusuf’s family has been living on the island of Hajamaro, just over three miles off the coast of southern Pakistan, for generations. But the island that was once a happy home has now become a prison.

Some 60 families like Yusuf’s live on a cluster of more than a dozen islands off Keti Bunder, a port on the Arabian Sea in Thatta district. With too little money to move to the mainland, they feel trapped.

“If we had sufficient resources to relocate, we would have moved to Thatta city some five years ago and quit fishing,” said Yusuf, 62.

Across Pakistan, families are struggling against rising sea level, droughts, floods and other climate-change related pressures. Many of them – those luckier or richer than Yusuf’s family – move to safer ground in new areas. Others are trapped where they are.

But as the number of families forced from their homes – or threatened by staying in them – continues to rise, Pakistan’s resources are coming under increasing strain, experts say.

Without more work to help families adapt effectively to the changing conditions, they say, the country could see surging numbers of people migrating.

Life on Hajamaro island is becoming nearly impossible, Yusuf says. With each passing day, the rising sea claims someone else’s land, or another family’s shack, he said.

Fish stocks near the shore are falling, in part as a result of rising pollution from nearby Karachi, where large quantities of untreated industrial waste are discharged into the ocean, according to Hameed Ullah Jan, a former Pakistan environmental minister.

The pollution pushes fishermen into deeper waters to find a catch, despite not having the right boats or nets for the job, he said.

The drinking water that island families fetch by travelling to Thatta city also is becoming more saline, due to seawater intrusion in underground supplies. They have no choice but to drink it, however, because they can’t afford to buy clean water, Yusuf said.

With limited access to potable water and pollution tainting their staple food of fish, Yusuf’s children often suffer from diarrhoea and fever – and the family is too poor to take them to the doctor.

Yusuf and his wife, Parto Bhari, have already lost two daughters to diarrhoea this year.

Now their three sons – aged 4, 10 and 12 – are sick too. “I can do nothing but keep praying for better health for my ailing sons,” Bhari said quietly.

A 2012 report by Asian Development Bank estimates that by 2050 there will be more than 250 million people in Bangladesh and Pakistan living in “hot spots” threatened by negative climate change impacts, such as flooding or drought.

“While most people will adapt in situ, the potential for redistribution of population through migration is substantial,” the report said.

Environmentalists in Pakistan say rising numbers of people have fled Pakistan’s coastal region in recent years to escape rising sea levels and saltwater contamination, and their movement could be just the beginning.

Experts and activists are calling for the government to intervene.

According to Arif Ahmad Khan, secretary of the Ministry of Climate Change, Pakistan’s constitution obliges the government to provide the “basic necessities of life” such as food, housing and education.

But while officials often pay compensation to people affected by development projects such as roads or bridges, they do little to aid those who need resettling as a result of climate-related problems, he said.

Sarwar Bari, national coordinator of the Pattan Development Organization, an NGO based in Islamabad, said migration levels could surge in the next few years unless officials initiate measures to help people cope with problems such as erratic rainfall, droughts, and floods.

“The government should include climate-related migration in its national climate change policy and help people cope financially with the phenomenon,” he said.

It’s not as easy as moving families out of hot spots into urban areas, said Shafqat Aziz, a food security expert with Oxfam Novib, the Dutch affiliate of the development charity. That would only increase the pressure on the resources of already congested cities, he said.

“The government should first map all the vulnerable areas to collect authentic data at the national level and then come up with a cogent policy to deal with the issue,” he said.

Aziz believes the best way to handle a potential migration surge is to make sure people don’t need to leave their homes in the first place.

The government should educate those living in vulnerable areas on ways of adapting to the impacts of climate change, such as changing farming cultivation patterns, he said.

“Local adaptation plans can help people ensure their livelihoods and safety in the face of calamities like floods, droughts and earthquakes,” Aziz said.

On Hajamaro island, Yusuf is not sure help will come in time.

“The rising sea has started swallowing our home, our livelihood, and our children,” he said. “Perhaps it’s in our destiny to be destroyed by nature.”