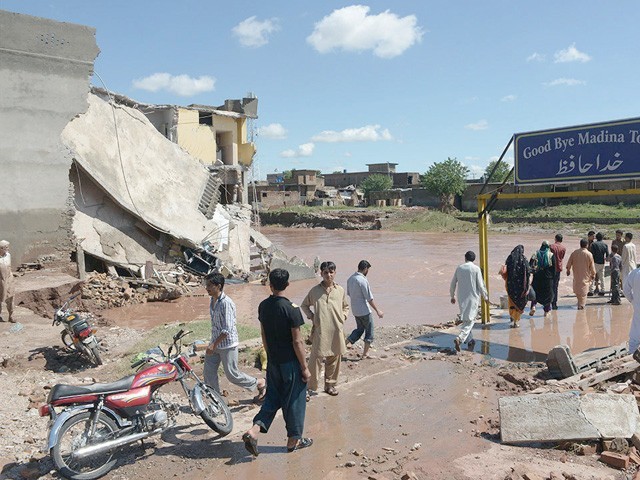 The recent monsoon floods have largely affected community infrastructure in Punjab and Azad Jammu and Kashmir where more than 5,000 community development schemes have been damaged costing over Rs15 billion to the national exchequer, a Recovery Needs Assessment and Action Framework 2014-16 report said on Sunday.

The report was jointly prepared after the floods by teams led by National Disaster Management Authority (NDMA) and United Nations Development Programme, and including experts from UN humanitarian branches FAO, ILO, UN-Habitat and World Food Programme.

It says that until recently, the major focus of the humanitarian response was on relief with very little early recovery support available to the affected communities.

According to the report, as many as 5,224 schemes have been damaged costing Rs15,892 million in 17 affected districts of Punjab and seven districts of AJK.

It is estimated that around 7,550 micro, small and medium size basic Community Physical Infrastructure (CPI) units are in need of partial or full repair in the worst hit districts. These include damaged link roads, culverts, embankments, irrigation channels, school buildings, health services, and water supply facilities.

The majority of affected communities in the worst hit districts still need community physical infrastructure rehabilitated to improve conditions in and around their dwellings. The community access to their houses, basic services, and marketplaces depends on rapidly implemented, emergency infrastructure restoration.

Major problems are likely to result from the damage incurred to infrastructure, varying in magnitude and scale in various locations. The assessment report notes that farmers cannot transport seeds and fertilisers, or harvested crops from market to farm or farm to market due to damaged link and access roads, jeopardising their income generation efforts.

Additionally, the report highlights that women, children and people with disability and age cannot freely travel to health services and schools because broken streets are filled with mud and sewerage.

The report also suggests that to revive the local economy in flood-hit areas, local communities should be involved in rehabilitation through cash-for-work initiatives where hiring preference will be given to local workers.