Aamir Khan should convert or go to Pakistan: Hindu Mahasabha

Aamir Khan should convert or go to Pakistan: Hindu Mahasabha 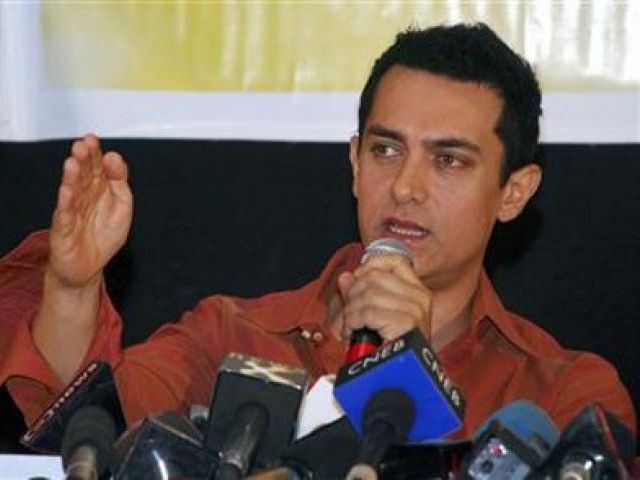 A leader of Hindu nationalist political party, Hindu Mahasabha, said on Tuesday Bollywood actor Aamir Khan should either convert or go to Pakistan following his comments regarding growing intolerance in India.

“Aamir Khan should either indulge in ‘ghar wapsi’ which will help him getting free of ‘crimes of love jihad’ of his previous as well as his present wife Kiran Rao or go to Pakistan for the benefit of India,” Hindu Mahasabha’s national general secretary Munna Kumar Sharma said.

Aamir disclosed on Monday that his wife was scared following a number of cases pertaining to religious intolerance and even suggested leaving India. His statements have courted a lot of censure in the country with the ruling party BJP and many Bollywood actors criticising his remarks.

At a meeting of the Hindu Mahasabha to discuss Khan’s remarks, which were meant to back writers and intellectuals who have returned their awards following the Dadri lynching and the murder of rationalists, Sharma went so far as to dub both Aamir and Shah Rukh Khan as traitors, as the latter had also made similar comments about the growing intolerance in India.

“A case of treason should be filed against Khan for insulting India and traitors like Aamir Khan and Shahrukh Khan should leave India,” Sharma said.

Aamir Khan safe in India, his comments are insult to fans: BJP

Further, National Vice President Pandit Ashok Sharma of the Hindu nationalist party also voiced his disapproval of Aamir’s comments, saying that it was India which had allowed him to marry two Hindu girls. He was pointing to the fact that Aamir’s ex-wife Reena Dutta as well as present wife Kiran Rao are Hindus by faith.

“If Aamir Khan’s wife doesn’t like India because it is intolerant, then the Khan family should go and settle in the ‘tolerant’ Syria. Only then, they will understand how tolerant India is; it is the same country which allowed Aamir Khan to marry Hindu girls not just once but twice.”

Do you think Indian-Muslim actors should leave India in the wake of growing intolerance? https://t.co/URvvmBCb9d

Further, the party’s Meerut District President Bharat Rajput stated that the actor should not forget that he had earned his money because of the ‘intolerant’ people who watched his movies.

“Aamir Khan should not forget that all the money and status he has earned so far is because of the ‘intolerant’ people who have watched his movies. Next time Khan releases a movie, he should announce that the movie is only for tolerant people and that the intolerant ones are not allowed entry in the theatres.”

A leader of Hindu right-wing party Shiv Sena also said Aamir should go to Pakistan following his comments. “He was a celebrated actor till now. But now it seems that we handed over milk to a snake. If he does not want to stay here, he can go to Pakistan,” Maharashtra Environment Minister and senior Shiv Sena leader Ramdas Kadam said, according to The Hindu.

Speaking at the Ramnath Goenka Excellence in Journalism Awards on Monday, Aamir had said, “When I chat with Kiran at home, she says, ‘Should we move out of India?’ That’s a disastrous and a big statement for Kiran to make. She fears for her child. She fears about what the atmosphere around us will be. She feels scared to open the newspapers every day.”

“There is this sense of growing disquiet. There is growing despondency apart from alarm. You feel why this is happening, you feel low. That sense does exist in me,” he had added.

This article originally appeared on Times of India.