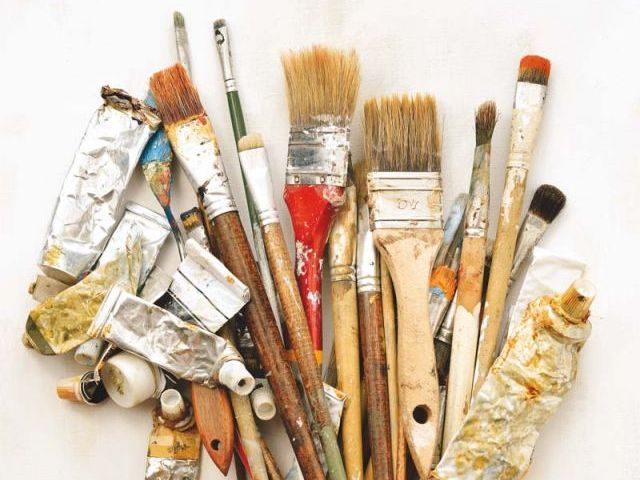 A childhood obsession  to scribble on walls with charcoal grew into a lifelong preoccupation to depict the underbelly of society for Sabir Mughal, a septuagenarian portrait artist and calligraphist from Abbottabad.

Mughal, 76, was born to lower-middle class parents from Nawanshehr, a town north east of Abbottabad, a city now known world over as the place where Osama bin Laden was hunt down by US Navy Seals. Mughal’s elder brother, Ghulam Hussain, also a calligraphist, inspired him to take up art. However, Mughal’s parents had other plans for him; they wanted him to join the army and discouraged his inclination towards art. “Once everyone in the house went to sleep, I would start scribbling on walls with charcoal and just keep practicing for hours,” says Mughal. He adds his parents were often at a loss to dissuade him and eventually let him accompany his elder brother to his studio. In turn, Hussain honed his brother’s skills and helped him become a disciple of Nazeer Hussain, a renowned painter from Abbottabad. There, Mughal learnt the basics of calligraphy and portraits. His portraits were not just faces of people, they were a commentary on society, often highlighting social issues. Sabir Mughal at work in his studio. PHOTOS: MUHAMMAD SADAQAT

As soon as Mughal retired from the army, he devoted all his time to art. He rented out a shop in Abbottabad, but business was hard to come by, forcing him to sell his artwork in Islamabad, Rawalpindi, Lahore and Karachi, where his pieces fetched better prices. This provided him with the encouragement to persevere.However, with no art galleries to display and sell his work, it became increasingly difficult for Mughal to support himself financially through art alone, and he started painting banners and signboards to get by. The meager income he earned from this was barely enough and Mughal eventually joined the Pakistan Army’s transport department, serving there for 25 years. “My service at the Pakistan Army never became an obstacle and I continued to practice after duty hours,” he shares.

Mughal’s artworks are mixed media. He employs tube paints, watercolours, oil paints and charcoal. Most of his paintings depict societal ills, such as injustice, oppression, poverty and economic disparity. Mughal says the pieces are an extension of his conscience because he pours all his feelings on canvas. His favourite topics include death and countryside culture. He has also made portraits of military leaders including Napoleon Bonaparte, Salahuddin Ayubi and Genghis Khan. While Mughal is not too worried about the appreciation for art diminishing anytime soon, he is unhappy with the hike in prices of paints and other art material. Had his determination been fickle, Mughal would have been deterred by the financial constraints but, fortunately, there is little to pry Mughal away from his passion, and he vows to portray his country’s culture in all its colourful glory, even the aspects shrouded in darkness.Mughal maintains artists from Indonesia, Iran, the subcontinent and Malaysia all have their distinct styles. He refers to Sadequain, Abdur Rahman Chughtai, Anwar Kamal and Ismail Gulgee, whom he claims reside in the hearts of their innumerable fans because of their inimitable styles.

Muhammad Sadaqat is a reporter for The Express Tribune in Hazara division. He tweets @MSadqat

Battle of the bulge