Removing the child from child labour for the last 20 years

Removing the child from child labour for the last 20 years

At the centre in Sukkur, 120 boys and girls are curren­tly gettin­g educat­ion
By Our Correspondent
Published: November 13, 2015
Tweet Email 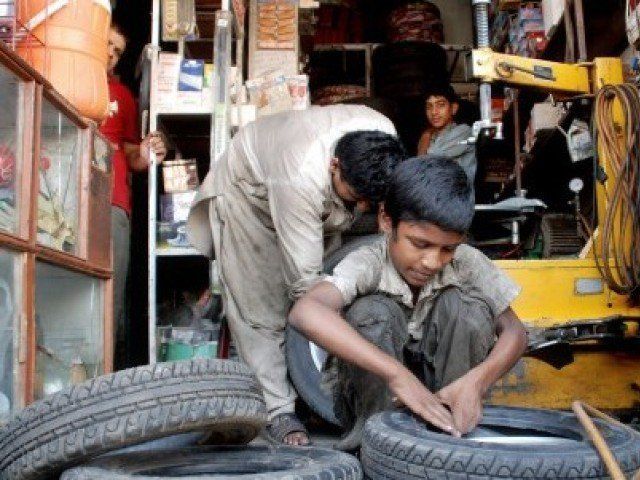 At the centre in Sukkur, 120 boys and girls are currently getting education. PHOTO: SHAHBAZ MALIK

SUKKUR: It was back in 1996 when Baitul Maal and International Labour Organisation came up with the idea of establishing primary schools, called the National Centres for Rehabilitation of Child Labour (NCRCL), throughout Pakistan to educate children of those people who are forced to send their boys and girls to work to earn livelihoods for the families.

It was not an easy job to motivate the parents of such children to send them to school. But with tireless efforts, the department succeeded in enrolling a large number of children, said the deputy director of Baitul Maal, Sukkur, Shabbir Memon. These centres will complete 20 years in January next year.

No to child labour, yes to quality education

According to Memon, children at the NCRCL in Sukkur get free uniforms, books and stationery along with Rs300 per month as pocket money. Besides this, he said, these children also get a chance to visit a historical site every three months. At present, there are 120 boys and girls getting education from class one to class five in the school, he said. “In January, when these schools will complete 20 years, we are going to organise a big event, which will be attended by the alumni of the school among others.”

Memon further told The Express Tribune that when these children complete their primary education and go to high schools, they keep track of them and provide assistance to them in every possible manner. He also thanked the labour department for its coordinated efforts in motivating and bringing these children to the schools. He said that children working at hotels, auto-workshops or homes prove to be helpful for their families, but remain unlettered. “Therefore, it is our endeavour to pull out as many children out of child labour as we can,” he remarked.

Inayatullah, a student of class four told The Express Tribune that he used to work at a bakery and is capable of making all kinds of bakery products. “Though I used to earn Rs1,000 per week, it was my desire to get education because without education there is no future,” he said. Inayatullah’s father is bed-ridden and his mother sews clothes to earn bread and butter for the family. He has three brothers and six sisters, out of which, two of his brothers work at hotels, while the third one is mentally handicapped. “It is my dream to become an officer so that I can mitigate the sufferings of my parents,” he said.

Jannat, another student of class four, has a father who is diabetic and therefore cannot work anymore. She has three brothers and eight sisters. One of her brothers works as a taxi driver and another at a hotel. Jannat used to accompany her mother, who works as a maid in three households, but is now happy to be attending a school. Jannat wants to become teacher. “Hailing from a very poor family, it was a distant dream for me to go to school,” she said. “But now I am not only getting good education for free, but also getting Rs300 per month as pocket money.”

Afsana, a student of class three, also wants to become a teacher and, therefore, gives much time to her studies even at home. Her father is a rickshaw driver and one of her brothers works at an auto-workshop. “Whatever is earned by my father and brother is not sufficient for the family of seven,” she said, adding that she hopes that one day, they will get rid of this extreme poverty. “It was very painful for me to see girls of my age going to schools. But it was not possible for my parents to send me to school. With the help of Baitul Maal, I am getting quality education.”

Incharge teacher Tahira Soomro told The Express Tribune that so far, 434 boys and girls have joined high schools after completing their primary education at this school. “All of them take great interest in their studies and I am optimistic that the future of these students is bright,” she said. “No doubt we face difficulties in correcting their accent in the initial stage because of their poor family backgrounds and the environment of slums. But I am happy that they are very quick at learning.” She also appealed to the poor parents who cannot afford to send their children to school, to send their children to this school in order to brighten their future.