I am a prince and I do what I want, said drugged-up Saudi royal

I am a prince and I do what I want, said drugged-up Saudi royal

Women say the royal threat­ened to kill one of the women if she refuse­d to 'party' with him
By Web Desk
Published: October 21, 2015
Tweet Email 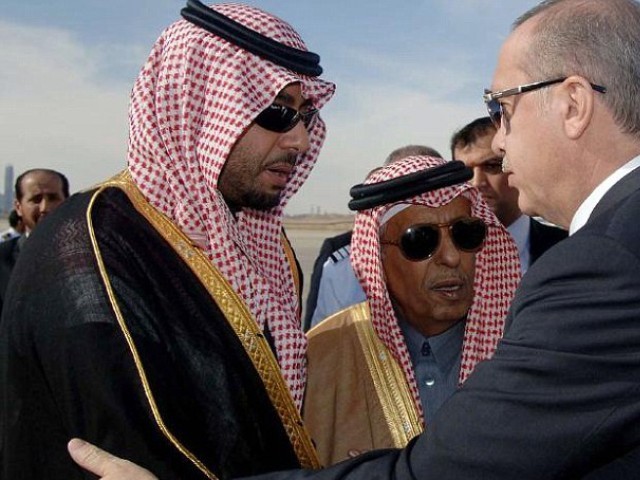 A Saudi prince, who was arrested last month at his LA mansion, is accused of having a sexual relationship with a male aide, taking cocaine and threatening to kill women who refused his advances — as well as sexually assaulting a maid, Daily Mail reported.

The staff has accused him of repeatedly making unwanted sexual advances while being drunk and high at his $37 million mansion in Beverly Hills and even forcing them to watch a male aide pleasure him, according to court documents.

The staff claims that the royal threatened to kill one of the women when she refused to ‘party’ with him and jumped on top of another and began rubbing himself against her in a “sexual and aggressive manner”.

He also attempted to urinate on the trio while screaming, “I want to pee pee”. When asked to stop, Al Saud allegedly then yelled, “I am a prince and I do what I want. You are nobody!” Another female staff member has alleged that she was made to watch while a different male aide bent over and broke wind in Al Saud’s face, apparently at his request.

These disclosures about the prince were made after felony charges were dropped against him by Los Angeles District Attorney due to lack of evidence. The case has now been passed to LA city attorney Mike Feur who will decide whether to pursue misdemeanour charges – which could lead to a year in jail and a $3,000 fine should he be convicted.

The women who had been employed by the prince to look after his Wallingford Drive mansion say that they still have not been paid and are hoping to recover their lost earnings. They allege that the 29-year-old prince threw a party on September 21 and arranged for “multiple escorts” to attend. As the evening progressed, he became “increasingly intoxicated” and was seen engaging in “illicit drug abuse”.

The next evening he threw another party where he “continued to engage in heavy drinking, cocaine use and more escorts came to the residence”.

The day after that, he attempted to urinate on the three women but was dragged away by an assistant before he could so. However, he returned ten minutes later and the incident in which he rubbed himself against one of the women occurred.  When she attempted to reason with him, saying, “I’m a woman” he screamed, “You’re not a woman, you are a nobody! I’m a prince and I will do what I want and nobody will do anything to me!”

The terrified women, who had often witnessed the prince physically abuse the male staff, hid on a balcony but was told by an aide to get back to work and that they were not supposed to have any breaks. One of them was then told to pour a drink for the prince and was subjected to a violent assault that left her badly bruised. When they attempted to leave, they found that they had been locked in by the aides. It was then that the royal threatened to kill the third woman, telling her, “You are going to go upstairs. I will be there in two minutes and you’ll do whatever I want. If not, then I’ll kill you.” Al Saud then, it is alleged, became even more agitated and began to “scream and make animal like sounds.”

The women managed to escape the house but had to return the next day to collect their personal possessions. The aides assured them that the prince would not bother them again but if they left then they would have to forfeit their wages. They were locked in again and when they next encountered the prince, he was masturbated by another man. Al Saud then ordered them to watch. One of the woman was also asked to “lick my whole body” by Al Saud in exchange for payment and says he became aggressive when she refused.

Finally, police was called when the prince’s girlfriend, who he had earlier accused of having sex with another man in the bathroom of a club the previous evening, and the original complainant were found covered in blood, crying and shaking. Al Saud was then arrested and led away by the LAPD, allegedly screaming, “No news!” at onlookers.

Al Saud has not been seen at his rented $37 million Beverly Glen mansion since his arrest late last month and is thought by neighbours to have fled the country.