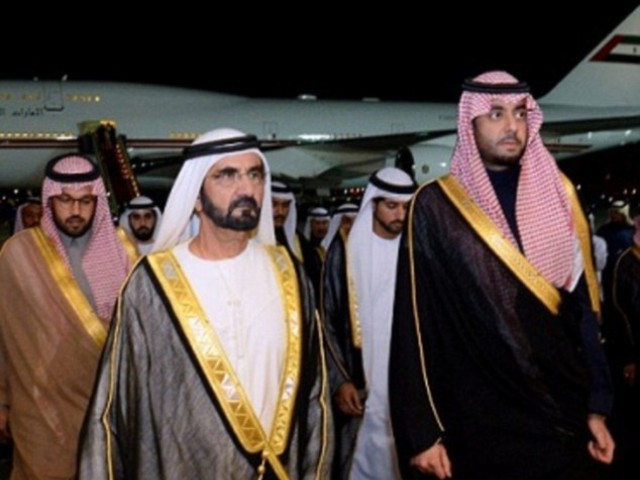 Prince Majed bin Abdullah bin Abdulaziz (right) is named in documents obtained by Daily Mail Online as the Saudi Arabian prince accused of sexually assaulting a maid and abusing up to four others. He is seen with Sheikh Mohammed, the ruler of Dubai, who he was officially welcoming to Saudi Arabia after the death of King Abdullah.

Majed Abdulaziz Al-Saud’s full identity was disclosed as he escaped felony charges for sex assault on Tuesday. The prince escaped the charges as Los Angeles District Attorney ruled there was not sufficient evidence against him.

The 28-year-old was arrested on September 25 and was released on a $300,000 bond the next day, according to police and online jail records.

The Saudi prince was arrested on charges of trying to force a worker at a Beverly Hills estate to perform oral sex among other charges.

The prince was due in court today to face an initial hearing but sources at the Los Angeles District Attorney’s office say the case has been turned over to the office of city attorney Mike Feur. When contacted Feur’s office said a case against Al Saud is currently being put together and a new court date will be scheduled for later this year.

The involvement of Feur’s office means the charges against the prince have been downgraded from a felony which could have left him facing up to four years in jail to a misdemeanour.

Meanwhile, lawyers acting for another three women, who claim to have been abused by Al Saud, have filed a civil complaint at Los Angeles Superior Court.

The documents which give the prince’s full name of Majed bin Abdullah bin Abdulaziz Al Saud make clear his lineage.

Abdulaziz was the first king of Saudi Arabia, and his son Abdullah was king until his death in January of this year.

The Los Angeles Times said police descended on the massive estate to arrest the prince after a neighbour saw a bleeding woman screaming for help as she tried to scale the property’s surrounding wall on Wednesday.

The $37 million home, in one of the most exclusive enclaves in the world, has been rented for weeks at a time by foreign nationals over the past year, the neighbor told the Times.