Al Thani is suspec­ted to be behind the wheel of an unregi­stered Giallo Modena yellow Ferrar­i LaFerr­ari
By Web Desk
Published: October 20, 2015
Tweet Email 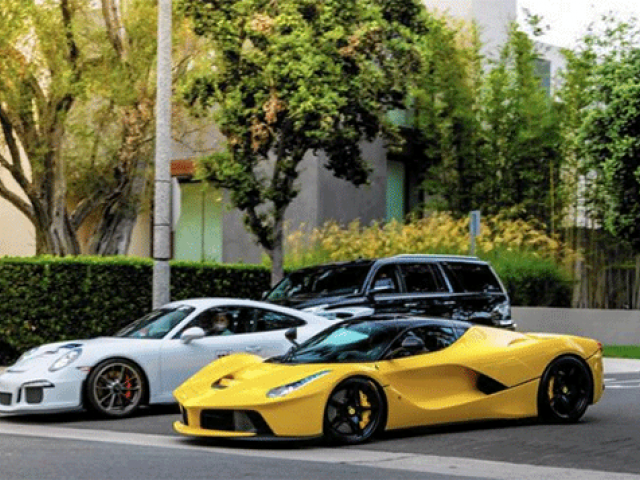 A Qatari Sheikh has fled the United States after staging an illegal street racing competition through Beverly Hills, Los Angeles, and “almost killing someone” as throngs of neighbourhood kids looked on from the sidewalks.

Sheikh Khalid bin Hamad al Thani is suspected to be behind the wheel of an unregistered Giallo Modena yellow Ferrari LaFerrari that street-raced another driver in a Porsche GT3 for over 30 minutes, according to the Daily Beast.

Al Thani, whose family had been living in a palatial house worth $55,000 a month in California on Walden Drive, as well as the a Malibu pad and a suite at the Beverly Wilshire Hotel, is now known to have fled the US after running into trouble with police over the incident. He had to forfeit the rent and deposit that he had to pay up front.

A source who had been following the Sheikh has revealed that his brother arrived in LA also sporting multimillion-dollar wheels—a satin white LaFerrari—and that his car magically “had a California plate on it within a day of arrival.”

“It wasn’t one lap,” said one neighborhood mom, who didn’t want to be named. “It was three laps. And my kids were outside on their bicycles playing. It’s just lucky it was a Saturday and a miracle they didn’t happen to take a life.”

One 10-year-old child who had witnessed the race related, “I was by the house and watched as they sped by my house and they woke up my parents, who were sleeping. Next day, [the sheikh’s family] were gone.”

The mother of the boy admitted that it was exciting for the kids but for the adults were angry over the incident. “They think they can come here and do whatever they want,” she said.

A car enthusiast reached by The Daily Beast who has many Arab friends and has seen unreleased videos from that day, spoke to various witnesses who were trailing the cars. According to him, the Sheikh was careful not to be seen. “He pulled one of the [Cadillac] Escalades up against the driveway so no one saw who was going in or out of the car.

One clip shows the same car zooming by a woman walking in a crosswalk whereas others show the LaFerrari and G3 drivers blowing at least one stop sign and callously coming within inches of sideswiping a sedan.

The wife of that driver said, “He was trying to turn on Walden [Drive] and he stopped and didn’t see a car and was going to go. My husband didn’t think ‘Somebody is going to come from behind at 100 miles per hour and hit me.’ They did get away with it. They’re gone.”

However, according to a source, al-Thani stayed around for a few days at his Malibu rental before he left. “I saw his [purple] Bentley and Escalade driving up along Pacific Coast Highway,” the source said.

The police is looking into the incident and are hoping that more witnesses and evidence would be forwarded to find out who was driving the cars. “We suspect [al Thani] has some sort of involvement in this but we can’t put him behind the wheel of the Ferrari,” said Beverly Hills Police Lt Lincoln Hoshino.

According to the police, Al Thani has admitted that he owns the cars but that he has diplomatic immunity. However, a State Department spokesperson has denied that.

Lieutenant Hoshino has assured that the police department will catch the culprit. “This is not the first guy with an exotic car we’ve run into. We don’t care who you are, or where or how much money you have.”

The sheikh apparently failed to register the cars in question with the State Department and local authorities. Lt Hoshino confirmed that the LaFerrari at least was “not registered” to be driving on the roads in California or anywhere else in the US.

A partner at Elite Luxury Homes, Chad Waterhouse, said the Arabs are flooding the Beverley Hills zone because they “want the ZIP Code.” “These types of tenants have more money than God,” Waterhouse said. “They don’t want the hotels. They have huge families and they rent homes all over Beverly Hills from July through September.