IG Baloch­istan Almish Khan says the bomb was a time device and plante­d on roof of the overcr­owded bus
By Mohammad Zafar
Published: October 19, 2015
Tweet Email 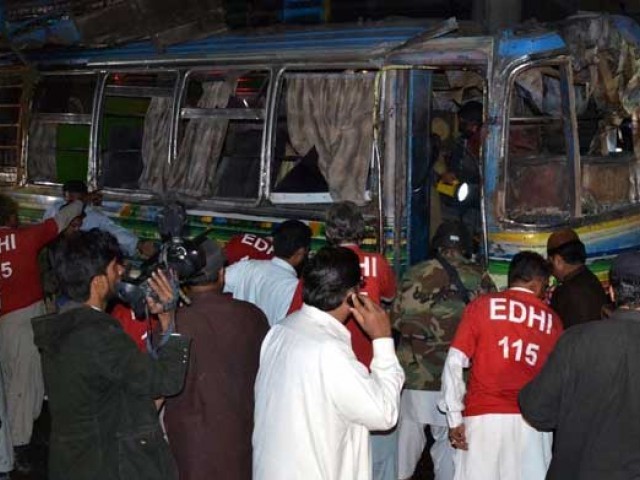 Rescue operations underway after a blast in Quetta on October 19, 2015. PHOTO: INP

QUETTA: At least 11 people were killed and 22 others injured in an explosion inside a passenger bus at Quetta’s Sariab Road on Monday evening.

Police Surgeon Dr Noor Baloch confirmed the deaths, saying eight of the injured are said to be in critical condition.

IG Balochistan Almish Khan said the bomb was a time device and planted on the roof of the overcrowded bus. “It weighed four to five kilogrammes,’ he told The Express Tribune.

“Most of the victims were sitting at the backseats when the the device exploded,” Mohammad Idress, an injured person told the media at Civil Hospital.

Passengers in the front row suffered minor injuries, he added.

Being the last bus to travel to the commercial district during the day, the bus was overcrowded with passengers on the rooftop as well. Many among the dead were on the roof, who suffered deep splinter wounds.

“I have imposed emergency at hospitals to cope with the situation,” he told the media.

He termed the explosion a sad incident in which daily wage labourers were targeted.

“We will chase the terrorists and bring them to justice,” he said, while directing all the doctors to be on duty and attend the patients.

No group has so far claimed the responsibility of the attack.