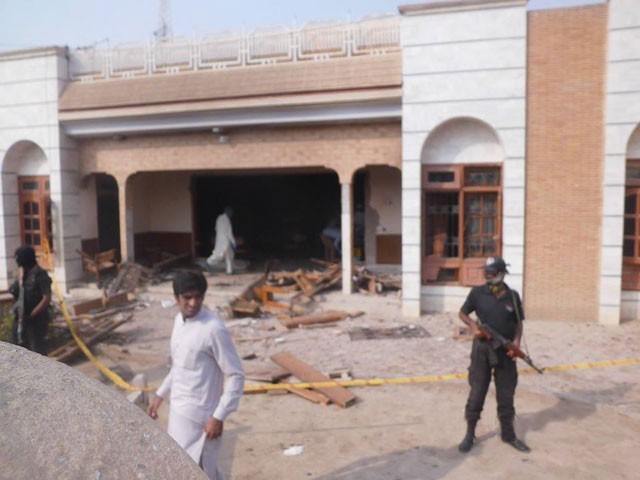 A view of the political office of PML-N MNA Sardar Amjad Farooq Khan Khosa after a suicide attack was carried out on October 14, 2015. PHOTO: EXPRESS

ISLAMABAD: At least seven people were killed while 13 others injured on Wednesday after a bomb exploded inside the political office of Pakistan Muslim League-Nawaz (PML-N) MNA Sardar Amjad Farooq Khan Khosa in DG Khan’s Taunsa area.

The explosion caused a fire at the office of the MNA who was not present in the vicinity at the time of the blast.

“Seven people are dead, 13 others are wounded and have been shifted to Tehsil Headquarters Hospital in Taunsa,” DPO DG Khan Ghulam Mubasshir Maken confirmed.

Rescue teams and firefighting vehicles arrived at the scene where investigation and rescue efforts are underway.

Sources said the sound of the blast was heard from at least two kilometres. Meanwhile, the bomb disposal squad was also called at the scene.

“The blast occurred at my political office in Taunsa while I am currently in Islamabad to attend a meeting,” Sardar Khosa said, adding the attack could be a reaction to the on-going military operation, Zarb-e-Azb, against terrorists.

Condemning the attack as an act of cowardice, the MNA pointed out that he did not receive any threat or alert prior to the blast.

Meanwhile, a Taliban splinter group claimed the responsibility for the attack, saying it was behind the blast at the political office of the ruling party’s MNA in DG Khan.

“The Tehreek-e-Taliban Pakistan Jamaatul Ahrar has carried out the attack on the election office of the PML-N lawmaker,” the group’s spokesman Eshanullah Ehsan said.

The militant outfit had parted ways with the TTP over serious differences last year. Security officials say majority of the Taliban leaders have crossed into Afghanistan and now operate from there.

In August, Punjab Home Minister Shuja Khanzada and 18 others were killed after two suicide bombers detonated a bomb at a meeting he was attending at his political office in Shadi Khan village, around 30 kilometres away from Attock city.