LNG pipeline, terminal: Govt to decide on Chinese firm’s bid in a month

LNG pipeline, terminal: Govt to decide on Chinese firm’s bid in a month 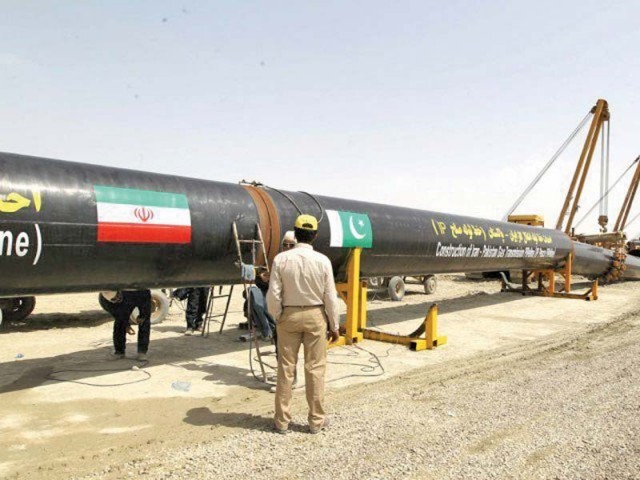 Officials of Pakistan and Iran will meet in the next few weeks to discuss the progress on the IP project. PHOTO: AFP

Inter State Gas Systems (ISGS) on Wednesday opened the bid submitted by a Chinese company for laying a 700km liquefied natural gas (LNG) pipeline and developing a terminal at the Gwadar Port, paving the way for executing the Iran-Pakistan (IP) gas pipeline project.

State-owned distribution companies – Sui Northern Gas Pipelines Limited (SNGPL) and Sui Southern Gas Company (SSGC) – will also get a share in pipeline construction as the Chinese company, China Petroleum Pipeline Bureau, is bound to award 30% of work to them.

“This is a significant development that shows Pakistan is serious about kicking off work on the IP pipeline, but its implementation hinges on lifting of global sanctions against Iran,” said ISGS Managing Director Mobin Saulat while talking to The Express Tribune.

The bid opening for the Gwadar LNG pipeline indicated that Pakistan was truly interested in pushing ahead with the IP project, he said. “We will table this progress before Iranian authorities in an attempt to seek extension in the deadline for completing the project.”

Officials of Pakistan and Iran will meet in the next few weeks to discuss the progress on the IP project.

China Petroleum Pipeline Bureau, selected by the Chinese government to lay the LNG pipeline and set up the terminal in a government-to-government arrangement, had submitted the technical and financial bid for evaluation.

The company is already working on pipeline projects stretching over 8,000 km in different countries including Myanmar, Bangladesh, Russia and other nations. It has also laid pipelines from Turkmenistan to China.

“This is the first project under the China-Pakistan Economic Corridor for which the technical bid has been opened,” Saulat said, adding its evaluation would take three to four weeks.

The Chinese government would provide a cheap loan covering 85% of the project cost and the Pakistani government would contribute 15% of funds, said the managing director of ISGS, a company established by the government to develop gas import projects.

The Chinese firm will build the new terminal – a floating storage and re-gasification unit (FSRU), which will be owned by ISGS. The terminal will have the capacity to handle imports of 600 million cubic feet of LNG per day (mmcfd).

The LNG pipeline, which will be of 42-inch diameter, will be laid on the IP pipeline corridor from Gwadar to Nawabshah.

“After sanctions are lifted, we will only have to lay an 80km pipeline to connect with the Iranian border,” Saulat said, adding German consultant ILF had completed a detailed engineering design of the scheme.

In a government-to-government deal, tenders are not floated, but all other steps are undertaken in line with the Public Procurement Regulatory Authority (PPRA) rules. “The tender was given to the Chinese firm that had submitted the technical and financial bid,” Saulat said.

“The engineering cost estimates given by the German consultant will serve as a benchmark in bid evaluation,” he pointed out and said the government would also examine the offer by keeping in view different parameters like the cost of projects in the country and regional states like India as well as the size of such projects globally.

The government could also go for negotiating the deal with hopes that the country would win the best price for the project, he added.

In its estimate, the German consultant has put the IP pipeline cost at $1.8 billion without FSRU terminal.

The price of steel, which stood at $1,300 per ton when the ILF gave the cost estimate, had come down to $900-$1,000 per ton, Saulat said. “The total cost of LNG pipeline and terminal may stand below $2.5 billion because of the fall in steel prices and compressors.”