The pope is the lead vocali­st on album titled Wake Up!
By AFP
Published: September 26, 2015
Tweet Email 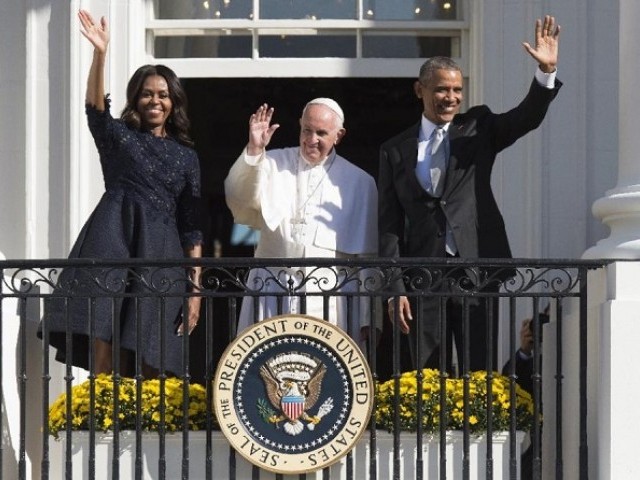 US President Barack Obama, First Lady Michelle Obama and Pope Francis wave during an arrival ceremony on the South Lawn of the White House in Washington, DC, September 23, 2015. PHOTO: AFP

NEW YORK, US: Pope Francis has been called a rock star among religious leaders and soon that will be true literally, with the pontiff out soon with an album.

The 78-year-old pontiff, who has been welcomed by giant crowds on a US visit, is the “lead vocalist” on Wake Up!, which comes out on November 27. The multilingual album features prayers and speeches from the Argentine-born pope, set to newly composed music.

Rolling Stone, the leading US music magazine, premiered a single entitled Wake Up! Go! Go! Forward! which features a speech in English by Francis on a trip to South Korea.

To the pope’s voice and the crowd’s applause, the song builds on rock guitar and keyboards akin to 1970s rock, as well as trumpets more reminiscent of The Vatican. “No one who sleeps can sing, dance and rejoice,” the pope says on the track.

Don Giulio Neroni, the producer and artistic director of the album, told Rolling Stone that contemporary music worked well for Francis’ words. “I tried to be strongly faithful to the pastoral and personality of Pope Francis: the Pope of dialogue, open doors, hospitality,” he was quoted as saying.

Francis, the first pope born outside Europe in modern times, has won a wide following even outside the 1.2 billion-strong Catholic world for his emphasis on social justice rather than conservative sexual mores.

In an address Friday to the United Nations, the pope called for reform to global financial institutions which he blamed for “oppressive” conditions on developing countries.

While the rock approach is non-traditional, successive popes have recorded albums based on their words, often combined with chants or other devotional music. John Paul II was involved in albums that included 1999’s Abba Pater, set largely to classical music.