Kashan Admani and Palash Sen speak about their collab­oratio­n on ‘ Yeh Dil’
By Our Correspondent
Published: August 16, 2015
Tweet Email 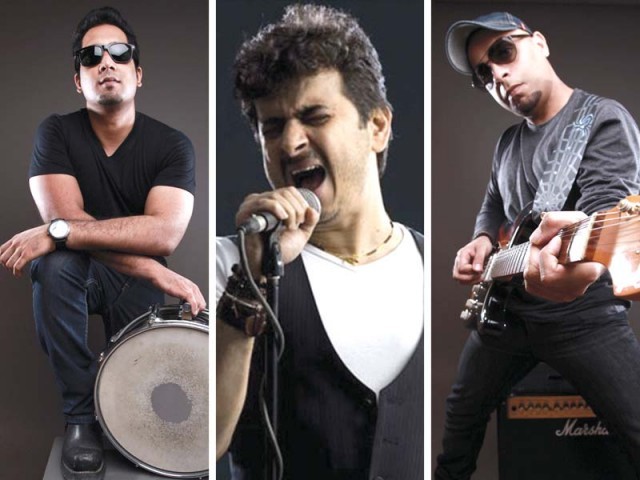 While announcing Mizmaar’s comeback after a decade-long hiatus one thing that Kashan Admani, the front man of the band, had spoken more freely about was the band’s desire for experimentation. Even their first song, which introduced their new vocalist, Mashad Shahryar, was a far cry from their previous singles and incorporated electronic dance music elements.

Keeping in line with the tradition of doing something fresh, the band recently released their new single, Yeh Dil, a song which features the vocals of Euphoria’s frontman, Palash Sen. Describing his latest single as a song celebrating the spirit of “independence and peace”; Admani told The Express Tribune , that the band had been keen on collaborating with Sen for a long time.

Read: Drumroll please: Snaring in a drum circle for the Qaumi Tarana

The song was in the works for quite some time and had been slated to feature on a music show, that he was initially set to produce, but unfortunately that never happened. “I had been mixing Euphoria’s songs for quite some time and had previously floated the idea of collaboration to Palash [Sen]”, recalled the lead guitarist of Mizmaar. “Initially we were going to feature the song on a show that I was producing but due to plagiarism issues (with the concept being lifted by another show) it never happened, so we decided to release the song as part of Mizmaar upon our comeback.”

Unlike their comeback song, Jee Loonga, which featured their new vocalist Mashhad, their latest release does not involve the new kid on the block and only includes Alfred Dmello and Kashan Admani from the current line-up. The decision to have a more flexible line-up and to keep on experimenting with new singers is somewhat inspired from Admani’s time as composer and producer. “I had been working as a composer for quite some time and had been recording musicians of different styles and genres. So when we decided to re-launch Mizmaar I had made the decision that we would try and involve as many different musicians as we could whether they be western or from the sub-continent.”

Despite this being Mizmaar’s first collaboration with an international group, this is not the first time that the Indian band has collaborated with a Pakistani band. In 2004 the group had recorded a similar song, Jeet Lo Dil, alongside Pakistani band Strings advocating the message of peace and harmony.

Admani believes that a major reason behind the band’s frequent collaborations is that their style of music is different from the work happening in India, in many ways. “Their style is very different and in many ways is un-Indian. Unlike most of the musicians in their country, they have not done film music and have continued to function as a band.” Yeh Dil is Mizmaar’s third song since making their comeback with the first being the rock-dubstep anthem Jee Loonga followed by the World Music Day release Dur.

Sen, who along with his band Euphoria has given us a number of hit number, such as Maeri and Kabhi Aana Tu Meri Gali, says the message of the song is simply that “love has no boundary,” reported IANS.

“Yeh Dil is my first official collaboration with Pakistani rock giants Mizmaar … The message is that love knows no boundaries. And we won’t let politicians and terrorists tell us what to do,” said Sen.

The Kabhi aana tu meri gali singer says that “music has crossed the line of control” and that “nobody has the guts or power to stop it”.

Closer than the jugular vein