OPINION The decency that India deserves

OPINION Kashmir — all talk no action

For decades, the people of Thar have been clambering aboard the khekhro for their journeys across the desert 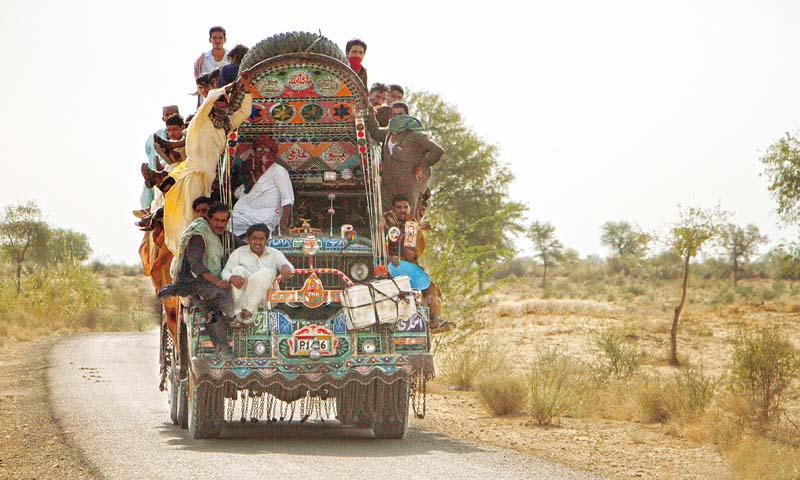 For decades, the people of Thar have been clambering aboard the khekhro for their journeys across the desert. PHOTOS : ABDUL HALEEM SOOMRO
For the people of Tharparkar in Sindh, the ‘crab’ — locally known as khekhro — is a symbol of hope. They keep an ear out for signs of its arrival: a honk, the sound of the engine and the lilt of Thari folk songs playing on a tape recorder. This khekhro is not the scuttling crab you might have imagined, but instead, a truck. Named for its crab-like structure, the vehicle is the main transport link for people, livestock and goods across the desert expanse of Tharparkar.

The arid Tharparkar region, spread over roughly 20,000 sq km, is dotted with sand dunes. During the tenure of former chief minister Arbab Ghulam Rahim, approximately 4,000 km of roads were developed here and now some buses and Jeeps have replaced the khekhro.

According to Washoo Mal, who constructs the bodies of these trucks, the khekhro has the capacity to easily mount the sand dunes, and thus, is known as the ‘king of the desert’. There are two types of trucks. The lodheng has one big seat at the front that can accommodate two to three people other than the driver, while other passengers remain standing. The lodheng is primarily used to transport heavy goods and can carry up to 16 tonnes of weight, including livestock. Meanwhile, the ‘passenger khekhro’ has three seats, each with a capacity of up to five passengers. Two seats are reserved for women and the vehicle can carry up to 14 tonnes of weight.

“The idea for this crab-like vehicle came about via America, as some transport trucks there had the capacity to carry 2.48 tonnes of weight,” explains Haji Allah Jurio Nohri, a local transporter. He says these American vehicles were imported to Pakistan, to be used especially in this desert region, bordering India. Between 1965 and 1971, Pakistani border forces auctioned off these American vehicles to people of Tharparkar and particularly Mirpurkhas district. Prior to this, the only mode of transport in the region were camels, horses and donkeys. Over the passage of time, local mechanics altered the American vehicles to enhance its load capacity, building onto the body, engine, tires and mechanical parts. Ultimately, the khekhro was born, morphing into a cargo-and-passenger vehicle.

Social activist Abdullah Khoso explains that the passenger khekhro has a small space on the left side of the driver’s seat, known as the ‘wrong side’. The only way to occupy this space is to sit with one leg swung out of the truck’s cabin. Often, this space is reserved for the driver’s crew or ‘special passengers’ such as the truck’s owner or relative or elders of the village. The holder of this seat is also offered tea and lunch by the driver.

The khekhro has two gear levers, one to speed up the vehicle and the other to curb speed, specifically when climbing sand dunes. Both kinds of khekhro can carry up to 150 passengers, with some hanging on to the body of the vehicle, while others sit on any available spot, including the roof.


“The khekhro was brought to this area in the 1970s by Photo Jogee who belongs to nomad tribe,” claims local journalist Ilyas Thari. He says the vehicle was first introduced in the Umerkot area, and a mechanic Rano Registani, from Naokot, suggested that the truck be used to ferry passengers. Thari also notes that some transporters offered the khekhro free of cost to families for the purposes of funerals. Transporter Khalid Siraj says the khekhro runs along pre-defined routes in Thar and popular stations or stops include Chachro, Umerkot, Islamkot, Mithi and Naokot.

Abdul Haleem Soomro is a social activist and freelance journalist.