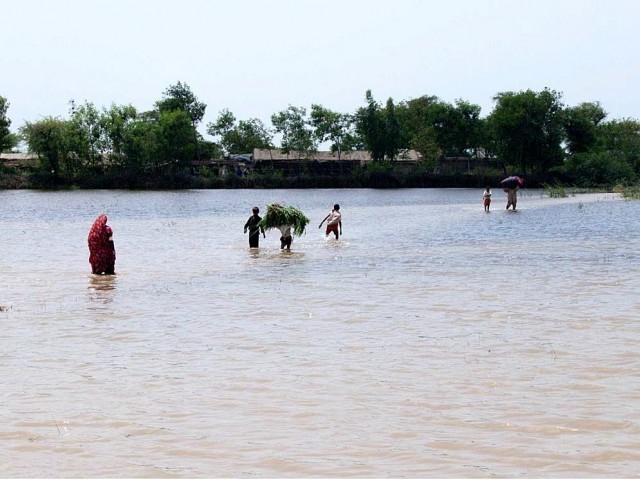 About 250 villages were inundated and had to be evacuated in 2011 floods. PHOTO: APP

HYDERABAD: The Left Bank Outfall Drain (LBOD), a vast drainage channel known for its destructive impact on Badin, reportedly flooded dozens of villages, destroying thousands of acres of crops in the coastal district.

The villages and the land have been immersed in water due to breaches, overflow and delay in the drainage of rainwater, which accumulated in the crop land. The LBOD starts from Ghotki district, which is located on the Sindh-Punjab border, and snakes through the districts on the left bank of River Indus before ending in the Arabian Sea on Badin’s coast. Its designed capacity is 4,500 cusecs, but in the 2010 floods, it is said to have carried a few thousand cusecs more than its limit.

“The same locations of the LBOD that had brought about the massive destruction during the 2010 floods have breached and overflowed,” said former Naib Nazim Azizullah Dero. The villages near Dhoro Puran, Kadhan Pateji Outfall Drain, Ameer Shah saline drain, Fauji Sugar Mills and Pangrio were affected.

According to Dero, the irrigation staff began to plug the breaches on Friday, a day after the water began to swamp the areas.

The Sindh Irrigation and Drainage Authority (Sida) is responsible for the fresh and saline water channels in Badin. Sida executive engineer Fawad Memon, who supervised the staff engaged in plugging the breaches and spill, could not be contacted.

However, an official of the Sida, requesting anonymity, did not rule out overflow or breaches as well as the complaints of a temporary delay in draining out rainwater from the farmland and the villages. According to him, the LBOD can carry downpour of less than 50 millimetres in 24 hours. A higher amount of rainfall in a day goes beyond the drain’s capacity of 4,500 cusecs.

The official pointed out another factor. “After the 2011 floods, the control over LBOD in Nawabshah, Sanghar and Mirpurkhas was given to the Sindh irrigation department while that of Badin remained with Sida. A lack of coordination often occurs, for example, about the quantum of water in the LBOD while it passes through these three districts before entering Badin.”

According to him, since the LBOD was flowing to its full capacity, it will take another three or four days before it begins to drain the rainwater standing over the vast areas of agricultural land in Badin.

The residents of the rural Pangrio town complained that their villages and farmland remain submerged almost a week after it rained. Ghulam Rasool Chang, a resident, claimed that the relevant authorities have not taken any steps to drain the stagnant water.

At a press conference at Kotri barrage on Saturday, irrigation minister Nisar Khuhro also acknowledged the need for reinforcing the structure of the LBOD. He said that the provincial government is making relief arrangements for the people affected by the LBOD.