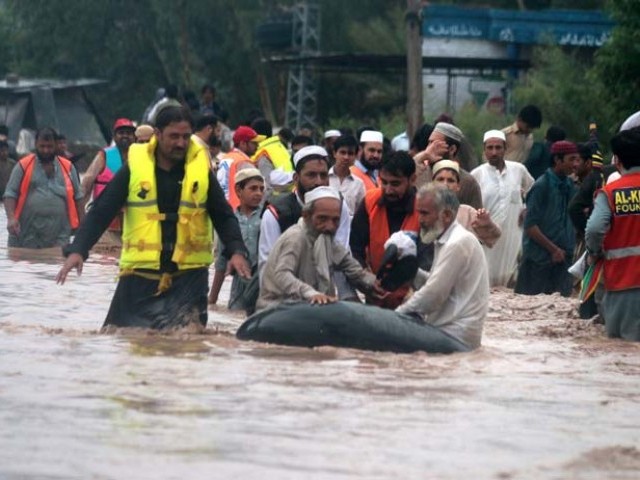 SUKKUR / DG KHAN / GILGIT / SHANGLA / CHITRAL / ISLAMABAD: The Pakistan Meteorological Department (PMD) on Monday issued a fresh advisory warning that the next three to five days are crucial, as moderate to heavy rainfall is expected across the country. The Met Office also forecast a surge in the intensity of floods across the country, especially in the catchment areas of major rivers.

Flash floods have already killed 69 people nationwide and rendered 294,844 others homeless, according to the National Disaster Management Authority. Ahmed Kamal, an NDMA member, said on Monday that two more deaths and eight injuries were reported in the past 24 hours, taking the death toll to 69 and the total number of injuries to 37.

“Thirty-four people have been killed in Khyber-Pakhtunkhwa, 15 in Azad Jammu & Kashmir, eight in Punjab, seven in Balochistan, and five in Gilgit-Baltistan.”

He added that the NDMA was not facing any challenges in utilising its existing resources for rescue and relief efforts in the flood-affected areas. The official said the authority has provided 2,300 makeshift shelters and tents, 24 tonnes of rations and food packs, 20 rescue boats and 1,500 tarpaulins to the disaster-hit people. “The armed forces have provided 249 makeshift shelters and tents and 72.52 tonnes of rations and food packs.”

Meanwhile, fresh floods swept away two more persons in the Torkaho area of Chitral, while in Shangla, the bodies of four tourists who had drowned in the Khan Khwar River on Sunday were yet to be fished out.

Moreover, the regional capital of Gilgit-Baltistan has been without electricity for more than 48 hours, as the main water supply pipeline that helps operate the 18MW hydel power project at Naltar was damaged in a landslide. The blackout is likely to persist for the next three to four days because the rains and floods have been impeding the repair work.

PMD Director General Dr Ghulam Rasul said the current monsoon spell would be fully activated across the country and cause heavy rainfall. He said red alerts have been issued to all the departments concerned.

Dr Rasul said the monsoon season would continue until September with more heavy rainfall, which is likely to intensify flooding across the country.

The PMD also issued a glacial lake outburst flood (GLOF) alert for G-B and Chitral district. “During the next four to five days a severe weather system is likely to persist in G-B and Chitral, with the potential to produce a GLOF.”

A flood warning has also been issued in Dera Ghazi Khan, with the flow expected to rise up to 550,000 cusecs in the Indus River on Tuesday.

Additional District Collector Mehboob Ahmad said a medium-level flood was expected over the next three days. “Nineteen villages will be affected by the flood.” He said 13 of the 23 small dams in the area have been declared sensitive, adding that floods have already ruined crops on 68,850 acres of farmland.

As for Sindh, high to very high floods carrying more than 600,000 cusecs of water are expected to pass through the Guddu Barrage within the next 36 hours. Sukkur Barrage control room in-charge Abdul Aziz Soomro said another flood carrying 650,000 to 700,000 cusecs is likely to pass through Guddu in the first week of August.