The patron of Islamabad Chamber of Small Traders, Shahid Rasheed Butt, has called upon the government to improve the food security situation which is linked to stability.

Pakistan must improve its deteriorating ranking in food security index as almost half of the country’s population remains food insecure, he said. He added that every individual has a right to physical and economic access to sufficient, safe, and nutritious food on a consistent basis that fulfills dietary needs.

Affordability, availability and quality of the food in Pakistan needs serious review as hunger is rising despite an increase in agriculture output which indicates lack of serious efforts on the part of the government. He said that countries like India, Sri Lanka, Angola, Bangladesh, Ethiopia, Malawi, Nicaragua, Niger, Vietnam, and India have performed better than Pakistan.

The government should think seriously about providing cover to over 61 million food insecure people which is a major national issue as rising food prices, floods, poverty, conflict, terrorism, energy crisis, economic slowdown and political instability are some factors behind hunger. 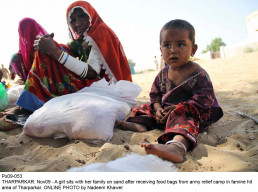 khan | 5 years ago | Reply @mahakaalchakra: You have more than enough poor in your own country, worry about them first.
the Skunk | 5 years ago | Reply Leaving CPEC corridor on one side, how can you not have this food scarcity problem and hunger when our politicians want to make history by coming to power three times and not do anything? How can you not have this problem of food scarcity and hunger when they prefer spending Eid every year in Saudia and Dubai and operate the Sindh government from UAE? How can you not have food scarcity and hunger when you have open corruption and china-cutting on an immeasurable scale? That is why the freeways, motorways, metros, are a bane and the absence of catchments, reservoirs, and dams is a curse. WHY ARE THEY NOT TRIED FOR TREASON??? Salams
VIEW MORE COMMENTS
mahakaalchakra | 5 years ago | Reply Most hunger and famine occurs in Tharparkar area of Sindh which is the only Hindu dominated area of Pakistan. I hope this is not deliberate.
Replying to X
Saved ! Your comment will be displayed after the approval.
Error !
Error! Invalid Email.