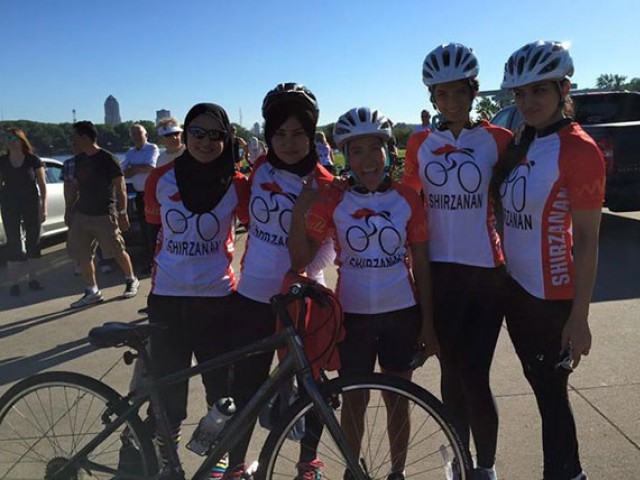 Female athletes from Pakistan, Egypt and Afghanistan to participate in the event. PHOTO: ONISLAM

CAIRO: A group of female Muslim athletes participated in Iowa’s annual statewide bike ride in an attempt to promote equality as well as women’s participation in sports.

“Our mission was to really promote female participation in sports as a female right and our hope was to kind of bring that to the attention and help inspire other women to pursue athletics,” Nanci Freed, the social media and logistics of the Register’s Annual Great Bicycle Ride Across Iowa (RAGBRAI) team said.

RAGBRAI has invited nine female Muslim athletes to participate in its 43rd annual ride, also marking the 50th anniversary of the team.

Hosted by Shirzanan Global, the event kicked off on July 19. Shizrana Global, a non-profit organisation focuses on and promotes Muslim female athletic participation, hence will be hosting the nine women who come to Iowa to ride alongside the Iowa women.

“Thinking about our upcoming milestone 50th birthday … we just decided to do something physically challenging but also socially relevant,” Mara Gubuan, the co-founder of Shirzanan Global said.

The Muslim athletes coming from countries across the globe, including Pakistan, Iran, US, Egypt as well as Afghanistan, range from an Olympic weight lifter to a soccer player from Afghanistan to a snowboarder from Iran.

The group feels that participation of Muslim athletes in such events gives inspiration to Muslim girls to play sports, which is one of the goals of Shirzanan Global.

Read: US Muslim girls come up with Shariah-compliant uniform to play basketball

“We wanted to identify and partner with women who had already broken the stereotypes,” Freed said, adding that “They come to represent that it is possible.”

The participation of the Muslim athletes aims to give inspiration to Muslim girls to play sports.

This article originally appeared on Onislam