The design­s which are suited to all sports will help Muslim girls partic­ipate in sports across the US
By Web Desk
Published: July 1, 2015
Tweet Email 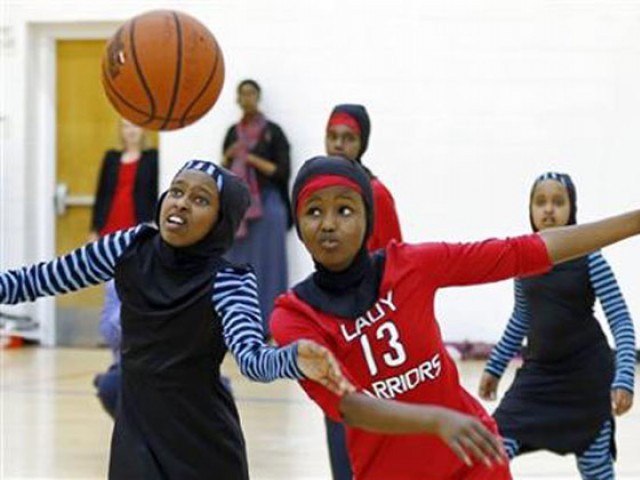 The travelling basketball team helped designers from the University of Minnesota and sports researchers craft uniforms for the team. The uniform covers the girls head arms and legs enabling them to freely participate in sports.

The traditional Muslim attire prevented girls from participating in sports such as basketball, soccer and swimming as the long dresses and Hijab hindered performance and presented a risk of injury.

The designs which are suited to all sports will help Muslim girls participate in sports in not just Minnesota but female Muslim athletes everywhere.

The Lady Warriors basketball team which includes girls from Somalia and other East African countries, showcased their uniforms on the runway carrying lacrosse sticks and boxing gloves. The idea dates back to 2008, when a college student Fatima formed a girls-only sports league – which now includes Lady warriors – and began utilising the gym in the Somali neighborhood of Minneapolis. The girls soon realised the traditional dress and basketball don’t mix. The answer, Thul said, was a functional yet modest uniform “so they could do that between-the-legs dribble, make that three-pointer, and not have clothing be a barrier.”

Sertac Sehlikoglu, a social anthropologist working on leisure, sports and the Muslim communities at the University of Cambridge, said in an email that having culturally sensitive sportswear would have a positive impact and agreed that the designs may catch on in other cities in the US that have large Muslim populations. She also noted that Iran has been developing culturally suitable sportswear for many years.

Style was important, said Amira Ali, 12, who helped with the design. The girls began attending major sporting events in 2013 to observe how sportswear works and put their ideas on paper with the help of university designers. The basketball teams Red uniform covers the arms and legs and includes a headpiece that covers the hair and neck.

The article originally appeared on ABCNEWS

China’s military on mission to bring ‘modern civilisation’ to Xinjiang