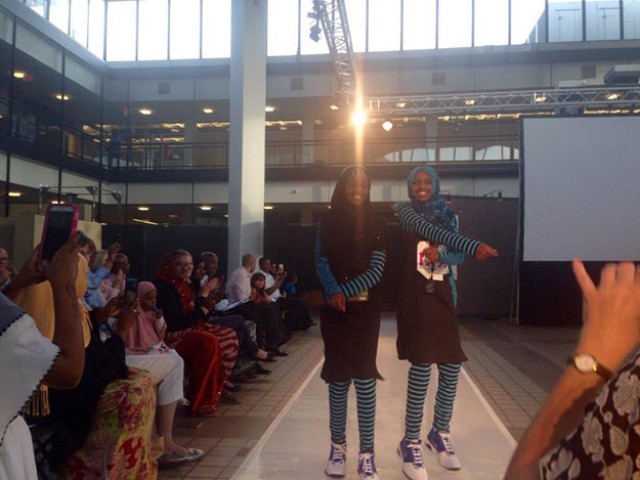 Muslim girls playing basketball in Minneapolis, United States, have found a way to confront their dilemma of either to exit the game or wear a dress that does not conform with their culture and religious believes.

The girls, playing for Cedar Riverside, designed their own clothing that would allow them to play basketball and still wear something that satisfies their religious and cultural values as well as comfort.

The middle-school, hijab-clad gamers, who choose to play at girls-only session at Brian Coyle Community Center twice-a-week, say they were restricted in their traditional long skirts.

“I wouldn’t be able to do moves or anything because of my skirt, and every time I run my wrap will keep falling,” the team’s point guard, Sihal Ali said while speaking to KARE, the Minneapolis NBC affiliate.

The girls then sought help from University of Minnesota College of Design and the Tucker Center for Research on Girls & Women in Sport along with a grant from the university. The students, along with community volunteers, sewed the uniforms at Mosque Shafici for four weeks in April, the Star-Tribune said.

Students worked on various modeled prototypes which were aimed at collecting feedback from community members and parents.

The dresses, featuring long-sleeved tunic tops, leggings with a tighter hijab and a flexible skirt were then debuted at an on-campus fashion event.

The Minnesota Daily said that the girls had incorporated breathable fabric. The hijab was also fastened in place to add more security to the cloth.

The girls of the East African origin actually work for Girls Initiative in Recreation and Leisurely Sports program initiated by Fatimah Hussein in year 2008 in efforts to enable the gamers stay vibrant and active.

Muslim women of all ages usually have a hard time finding and wearing dresses that are culturally appropriate.

Around the world, women athletes have had a hard time participating in sports owing to religious and cultural considerations.

At other times, incorporating clothing such as headscarves into uniforms have seen them being barred from major international sporting events. One example of this was in 2011 when the Iranian football team was disqualified from the Olympics because of a FIFA ruling banning their hijabs, though it overturned the decision the following year.

Last year, the International Basketball Association was criticised for banning hijabs and other religious headwear, but this rule too was relaxed afterwards. However, it still caused problems for Qatar’s basketball team at the Asian Games held last year.

However, with this new set of clothing, at least Muslim girls in US will be able to partake in school and college basketball more, if not the NBA.

Cops, harassers laugh after Muslim mother’s ‘headscarf’ was yanked off in London