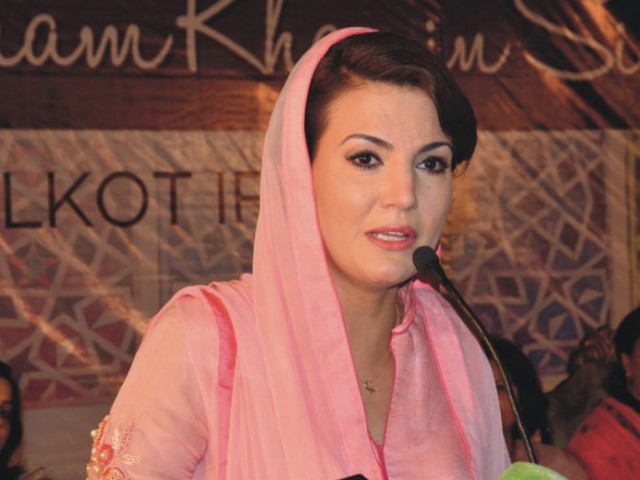 Reham kicked off her career at the BBC after studying a postgraduate course ‘in Broadcast Journalism at North Lindsay [sic] College’, in Scunthorpe, Lincolnshire, according to her own official website.

Reham’s personal website states that she became a reporter on the BBC regional show South Today after starting a postgraduate course ‘in Broadcast Journalism at North Lindsay [sic] College’. However, according to officials at North Lindsey, it has never offered such a course.

“Reham Khan has not been truthful about her qualification,” said the British newspaper that first disclosed the news of her marriage with the PTI chief.

Further, the college reportedly denied enrolling any student by the name ‘Reham Khan’.

‘We do not have anyone by those names or date of birth having attended this college,’ said a spokesperson for the college and added: ‘We have never done a degree in broadcast journalism.’

PTI leader Nazia Rabbani however out rightly denied the media reports and said Reham will herself clarify this issue.

Meanwhile, Muhammad Asif aka DJ Butt, the famour DJ known for dominating the music scene at the PTI sit-in in Islamabad last year, said a false propaganda was being waged against Reham Khan.

The PTI chief’s new wife who hails from the Hazara Division is currently employed as an anchor for a private television channel in Pakistan.

However, this is not the first marriage for the newlywed Reham. She was previously married to her first cousin Ejazur Rehman when she was just 19 years old. Her cousin and former husband was 33 at the time.

Her first marriage ended five years ago after the couple developed differences over Reham’s job at the BBC, according to her family. Like Imran, Reham also has children from her previous marriage – three – all of whom live with their father in England.

However, the honeymoon period for newly weds Imran and Reham didn’t last too long. While the PTI chief was dealing with protesting parents at Peshawar’s Army Public School, Reham embroiled herself in a bitter war of words with her former husband psychiatrist Dr Ijaz Rehman over claims of domestic violence.

Imran’s new wife, Reham, 41, said she had been a victim of domestic violence during her marriage to the 54-year-old psychiatrist with whom she has three children, Daily Mail reported.

Of late, Reham has teamed up with Imran Raza Kazmi to produce Jaanan, a romantic-comedy about a Pashtun family, slated to release on Eidul Fitr next year.

Reham says she’s open to working with new talent, bringing out the best her country has to offer. On working with Kazmi, she states, “It gives me even more courage to stand tall and not allow any negativity to be a hindrance in way of what I want to achieve.”